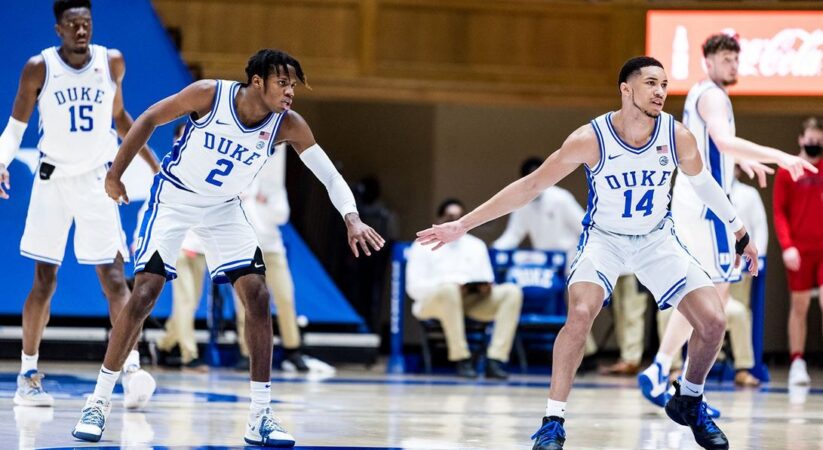 Tuesday’s game is the 99th meeting between Duke and Georgia Tech, with the Blue Devils leading 75-23 … In Atlanta, Duke leads 29-15, including 23-15 at McCamish Pavilion … The Blue Devils’ 14-game winning streak in the series is the team’s longest active streak against ACC opponents … The Blue Devils took last year’s meeting on the Flats, 73-64, behind 16 points from Tre Jones on Jan. 8, 2020 … When the teams met Jan. 26 at Cameron, DJ Steward scored 19 and Matthew Hurt added 17 in a 75-68 Duke victory.

As Duke’s young roster has gained confidence and experience, the Blue Devils are playing better team basketball as a result … Duke is second to Georgia Tech in the ACC in assists at (16.1) — 36th nationally, and is fifth in assist/turnover ratio (+1.26) — 46th nationally … Duke’s 141 assists in eight games (17.6) in the month of February led the ACC, were 14th-most nationally, and the third-most by any power conference team behind Nebraska (144) and Iowa (143) … While increasing their assists, the Blue Devils also took better care of the ball in February with a +1.47 assist/turnover ratio for the month … Over the last five games, Duke has 94 dimes and 56 turnovers (+1.68) … This season, Duke has improved both its assists per game and assist/turnover ratio each month.

A Blue Devil has been the ACC’s freshman scoring leader in six of the last seven seasons and seven of the last nine … Freshman DJ Steward is looking to keep that run going in 2020-21, as Steward is ranked first in scoring among the conference’s freshman corps at 13.1 points per game (ranked 20th overall in the ACC) … The Chicago native posted a 19-point, five-rebound, three-assist effort against Georgia Tech, with his ACC career-high of 21 coming in home wins over Wake Forest and Syracuse … In the win at Wake, he posted a 16-point, seven-rebound, three-assist, two-steal effort in 30 minutes … Against Virginia, Steward nailed a clutch corner three to tie the game at 56-56 with 5:49 to play, and his pull-up jumper pulled Duke within one (65-64) with 2:41 left … Steward has hit at least one three-pointer in 17 consecutive games — he’s also started in each of the 17 … He has scored in double figures 15 times this season, including in 14 of the last 17 games.

Senior Jordan Goldwire leads the ACC in assist/turnover ratio this season (+2.60), while ranking second in steals (2.45) and seventh in assists (3.9). He is 13th nationally in steals per game … A tenacious on-ball defender that has come off the bench nine times this season (eight in ACC play), Goldwire has 2+ steals in 18 of 20 games this season and his 18 multi-steal games are tied for second-most in the NCAA … Only Georgia Tech senior Jose Alvarado (114) has more steals over the last two seasons than Goldwire’s 96 … At 2.45 steals per game this season, Goldwire is on pace for a top-five steals per game season in Duke history … His career-high five steals came against Winthrop last year and he has recorded four steals four times this season … Not just known for his defense, Goldwire has recorded 4+ assists in seven consecutive games with 30 assists and just 12 turnovers (+2.5) in that span … After nine turnovers over the first four games this season, Goldwire has just 21 turnovers over the last 16 games. His assist/turnover ratio over the last 16 games is +3.00.

MOORE WAYS THAN ONE

Sophomore Wendell Moore Jr., came off the bench at Pitt on Jan. 19, giving Duke 31 minutes and hitting 5-of-10 from the field, including a career-high three made three-pointers, for 15 points … He has started the 11 games since Pitt, and making contributions all over the box score for the Blue Devils … Scoring: went for 24 and 10 — his second career double-double versus Notre Dame to cap a three-game stretch that saw him average 19.0 points … Rebounds: is Duke’s second-leading rebounder in ACC play (5.1), and has 4+ rebounds in 15 of the last 16 games … Assists: Set a then-career-high six assists at NC State and followed that with a career-high seven vs. Virginia … Has 3+ assists in 11 of the last 12 games and is averaging 3.6 dimes over that span.

DUKE AWAY FROM CAMERON