Saturday, 26 November 2022
You are here: Home Entertainment How to Stream Disney’s ‘Encanto’: Your Viewing Guide 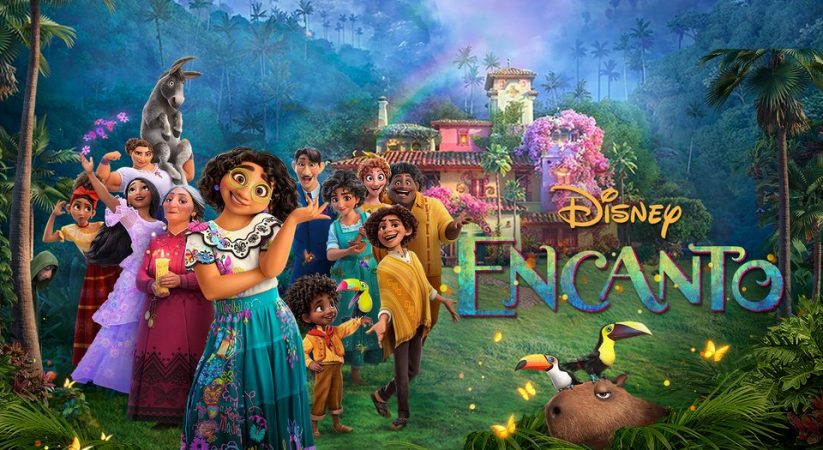 What starts as a lesson in history turns into a tale of magic and enchantment in this vibrant animated film from minds at Disney and the stage production Hamilton. Lin-Manuel Miranda joins a long list of creative minds as the songwriter for this trip into the mountains of Colombia. Tucked away and hidden from society, the charming town of Encanto is home to the Madrigals, a larger-than-life family who has benefited from mysterious magic since the Thousand Days’ War. When that magic is threatened, though, it may be up to the Madrigals’ most ordinary family member to set things right.

While the magic of Encanto has bestowed Mirabel’s family with unique abilities, she remains normal and untouched by the strange power. Her quest to save the family’s home and preserve their magic uncovers secrets that threaten the sanctity of Encanto and the bond between the Madrigals.

Encanto is a delightful story of family and destiny scribed by Charise Castro Smith and Jared Bush. A stellar and diverse cast including Stephanie Beatriz, John Leguizamo, Mauro Castillo, Maria Cecilia Botero, and so many more bring the incredible Madrigals to life in this whimsical tale. If you missed it in theaters or want to sit down with the Madrigals again, we’ll break down exactly how to stream Encanto on Disney+.

How to Stream ‘Encanto’ – Exclusively on Disney+

Encanto is available on Disney’s streaming service, Disney+, and can be watched with a full subscription or through one of the occasional free trials offered throughout the year. Disney+ is available on its own for $7.99 / mos or as part of a bundle with Hulu and ESPN+ for $13.99 / mos.

To watch Encanto on Disney+:

Release Date: November 24, 2021
Creators: Written by Jared Bush, Byron Howard, Charise Castro Smith, Jason Hand, Nancy Kruse, and Lin-Manuel Miranda
Director: Jared Bush and Byron Howard
Starring: Stephanie Beatriz, John Leguizamo, Maria Cecilia Botero, Mauro Castillo, Jessica Darrow
Rating: PG
Synopsis: When the magic of the Madrigal family starts to wane, the most ordinary of them all sets out to find out why. Along the way, she uncovers secrets and a prophecy that threaten to tear the peaceful town of Encanto apart.

How Long is ‘Encanto’

During the height of the Thousand Days’ War, Alma Madrigal and her husband Pedro are forced to flee their home. When Pedro passes away, Alma must keep watch over her triplet infants, Julieta, Pepa, and Bruno. When all hope seems lost, mysterious magic imbues her candle, ridding the land of Alma’s pursuers and erecting the Casita, a house with a mind of its own. There, Alma establishes the town of Encanto and lives happily with her family for 50 years, the magic holding strong and providing generations of Madrigals with magic powers.

The tradition of unique abilities is carried through every child except one – Mirabel. Outcasted for her lack of powers, Mirabel is the only one to see a premonition of the magic fading, forcing her to embark on a journey to save the Madrigal magic. Along the way, she learns the truth of her Uncle Bruno, uncovers family secrets, and finds that it doesn’t take special abilities to actually be special.

Encanto features a diverse cast of actors, well-known and otherwise that help bring the colorful Madrigal family and the people of Encanto to life.

Encanto was Beatriz’s third voice-over role. In 2016, she provided the voice of Gertie in Ice Age: Collision Course, and three years later, joined the cast of The Lego Movie 2: The Second Part as General Sweet Mayhem. She was originally slated to play Luisa based on her role on Brooklyn Nine-Nine, but production changed its mind once they found her to have a bubblier personality.

Leguizamo plays the mysterious Bruno, the Madrigal uncle ostracized for his ability to see the future. Originally, Bruno was to be named Oscar, but the name was changed to better fit “We Don’t Talk About Bruno” and to avoid legal issues with several real-life Oscar Madrigals.

Botero and Merediz split the role of Alma. Cecilia lends the matriarch her voice while Merediz steps in for any singing roles. Botero also reprised the role for the Spanish dub of the film.

Castillo fills in the role of Felix, Mirabel’s fun-loving uncle. He plays against his wife, Pepa’s, more serious attitude. Castillo returned for the Spanish dub of Encanto to voice Felix.

Darrow portrays the superhuman Luisa, Mirabel’s second oldest sister. She is constantly worried about letting her family down and ultimately helps Mirabel on her quest to save the family’s magic.

While Encanto is a movie with plenty of heart, its soul is in its soundtrack. Lin-Manuel Miranda stepped in to write the memorable tracks that chronicle the Madrigal legacy and Mirabel’s journey. Co-composer for Coco Germaine Franco joined Miranda to provide the film’s score, which landed the soundtrack at number one on the Billboard 200 in November 2021. It was the first Disney soundtrack since Frozen II in 2019 to top Billboard’s charts.

Miranda wrote eight original songs for Encanto, and tracks like ”We Don’t Talk About Bruno” blew up on social media. The soundtrack has been released in 46 languages in total, including the English and Spanish versions.

For their work on the soundtrack, Miranda and Franco were nominated for a 2022 Annie Award for Best Music – Feature. Miranda received five additional nominations at the Satellite Awards, the Houston Film Critics Society Awards, the Georgia Film Critics Association Awards, the Golden Globes, and the Critics Choice Movie Awards.

‘Encanto’ at the Box Office

However, an estimate from The Daily Campus suggests the film needed to take in $400 total to break even and cover the full production and marketing budget.

‘Encanto’ Reviews – What the Critics Said

Though the box office may have been a little light, Encanto benefited from mostly positive reviews. Rotten Tomatoes aggregate reviews landed the film at 7.5 / 10. Metacritic’s average put the film at 76 / 100. However, CinemaScore proved more generous, giving the film an “A” grade.

Despite its generally favorable reviews from PostTrak, Associated Press, and The Washington Post, The Guardian’s Peter Bradshaw offered harsher criticisms. The Age’s Jake Wilson scored the film a 2 / 5, stating, “Encanto isn’t a realistic story of family dysfunction but a fairytale.”

If there is one good thing about a Disney movie outside of the entertainment value, it’s uncovering some neat facts about the production. Encanto has many of its own facts, and we’ve compiled these quick five.

What Does Encanto Mean?

Encanto certainly is a cute name for a town, but it wasn’t chosen just because of how it sounds. Translated from Spanish, Encanto means enchantment or spell. It can also be used as an adjective for “sweetheart.”

A fantastical tale about a magical family is likely to not be rooted in reality, but producer Clark Spencer did reveal that the film had a real-world inspiration. Per Spencer, the inspiration was her grandparents because her grandfather died as her grandparents fled their home, leaving her grandmother with her triplets. Spencer went on to say her grandmother was guided only by candlelight she believed was her husband’s spirit.

As with many Disney movies, Encanto is full of Easter eggs to previous properties. The most expected one is the assortment of hidden Mickey Mouse shapes found. One is a cactus-shaped like the mouse, while another appears during “Waiting On a Miracle” amongst the fireworks.

WALL.E also earns a reference with a plant being grown in a brown boot in Bruno’s room. Bruno also sported a reference to Fantasia in the form of a picture of Sorcerer Mickey.

Out of all the movies Disney has created, Encanto is the first to feature an animated female character wearing glasses. The reason behind the specks is pretty simple – “Mira” is the Spanish word for “look.”

Bruno isn’t nearly as bad as the Madrigals paint him out to be, and after meeting the character, “We Don’t Talk About Bruno” comes across as a little harsh. However, the Bruno we see isn’t the first one Disney came up with. John Leguizamo, the voice behind Bruno, noted in an interview that the original character was cockier and more full of himself.

We DO Talk About Bruno

Throughout the film, Bruno is the character the Madrigals do best to forget, even going so far as to sing about how they don’t even talk about the ostracized uncle. However, audience members were likely intrigued by the character if they were eagle-eyed enough to spot him hiding in the film’s poster. Bruno slinks about in the vibrant poster, keeping close to his family just as he does in the film.