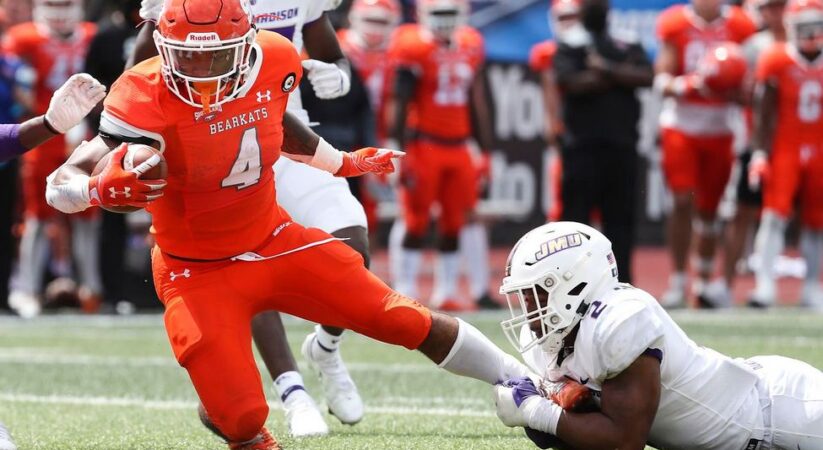 Jequez Ezzard’s catch-and-run for a touchdown and punt return for a score were among two of three touchdowns Sam Houston State scored in the last 2 1/2 minutes of the third quarter en route to a 38-35 comeback win against James Madison on Saturday.

“At no point I thought we would lose,” Bearkats coach K.C. Keeler said in an interview after the game.

James Madison led 24-3 at halftime and were up 27-10 with three minutes left in the third before Ezzard struck.

Eric Schmid threw a slant to Ezzard who caught the ball about 14 yards into his route and he took it the rest of the way for a 69-yard touchdown reducing the deficit to 27-17.

After forcing James Madison to three-and-out, Ezzard ran back a punt 80 yards to cut the lead to three. Zyon McCollum then picked off Cole Johnson after his pass bounced off the hands of his intended receiver on the Dukes’ first play of the drive.

Schmid ran it in from 20 yards out as time expired to end the third quarter for a 31-27 Sam Houston State lead it never gave back.

Johnson threw for 271 yards and three touchdowns for James Madison.

Mark Gronowski passed for two touchdowns and caught a 24-yard TD pass from Pierre Strong Jr. to help top-seeded South Dakota State beat Delaware 33-3 in the semifinals of the FCS playoffs on Saturday.

The Blue Hens (7-1) took a 3-0 lead on Ryan Coe’s field goal with 3:44 left in the first quarter. South Dakota State needed only 7 minutes, 26 seconds time of possession to score TDs on its next four drives.

Nolan Henderson completed 18 of 21 passes for 142 yards for Delaware. The Blue Hens won six national championships between 1946 and 2003. Since advancing to the FCS championship game in 2007 and 2010, the program had appeared in the playoffs just once, in 2018, before this season.

The Jackrabbits defense had seven sacks and held the Blue Hens to 68 yards rushing on 45 carries.