Wednesday, 22 June 2022
You are here: Home Google’s I/O Adventure was almost as good as being there 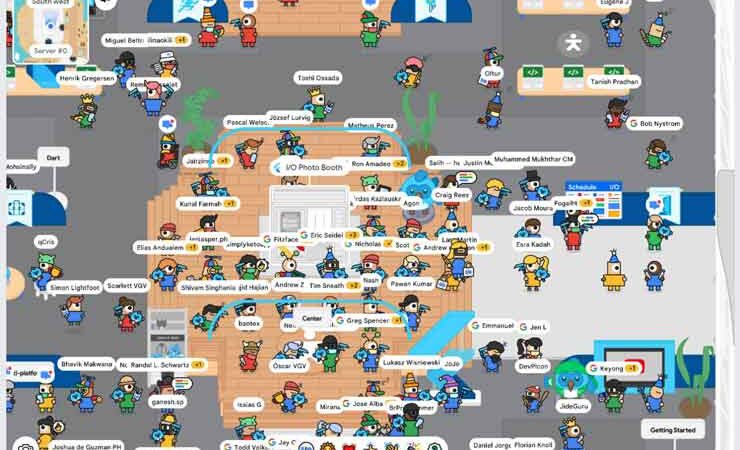 Google I/O was this previous week, and keeping in mind that there were as yet the typical declarations and data dump, the pandemic made the show online-as it were. Ordinarily, individuals from across the world plunge upon the Shoreline Amphitheater to find out about Google’s new items and engineer drives, trade stories, and organization. In any case, none of that could truly happen this year, in any event not face to face.

Google often tries to “gamify” these tech trade shows (I’ve been known to sometimes get addicted to them), but this year Google I/O was an actual game, called Google I/O Adventure. This is Google I/O, with all the booths and information you would expect, but rendered in a 2D, top-down, MMO game that you and everyone else virtually attending can run around in. The game has a rolling chat window for nearby players, and tables in the game world start up a private chat for everyone sitting at them. It was sort like a Google I/O version of Second Life or an MMO Animal Crossing that runs in your desktop browser. I/O was only three days long, so most of the hustle and bustle of I/O Adventure is over, but the world will still be online for the next month.

At the point when you start the game, you initially go through character creation and can just pick fundamentals like hair, skin tone, and a couple of alternatives for arms and legs, including wheelchairs and some robot parts. The game is a gather a-thon however, and dispersed across the virtual Google I/O during the show were a wide range of frill that fit into different corrective things space. You could stop by the Android stall and get a cool Android cap or get a disconnected dinosaur doll from the Chrome corner. There are NPCs to converse with and small games like golf, fishing, and a couple of music games. The controls are dead basic: WASD and that is it. On the off chance that you need to cooperate with something, stroll into it.

The corners are spread out like at a genuine expo, publicizing new highlights and APIs that designers may be keen on. You could stroll around and get connections to YouTube recordings and blog entries, and a few things were given out through tests that tested your insight into the new declarations. Some portion of how Google gamifies genuine exchange shows is with collectibles that assistance manage individuals through a show and get them to visit corners they in any case wouldn’t be keen on. A similar cycle works in the virtual world: clients need every one of the things, so they end up in corners that in any case regularly wouldn’t enter. You could take a gander at a site page loaded with joins and get generally a similar data, yet I/O Adventure is a greater amount of a data revelation framework that occurs while you’re playing.

Genuine Googlers are hanging out at the corners, actually like at a genuine Google I/O (or possibly they were during the three days of the show), and you can bob inquiries off them or find support with things through the visit. Googlers are totally marked with a beautiful “G” over their heads, signifying they really understood what they were discussing. (I was given a red letter that said “Press,” so everybody knew not to blabber when I began posing inquiries.) You can even round out a cord so individuals could tap on your character and see your work title, organization, and even connections to your Twitter or Github.

We’re all stuck at home due to COVID, but this game/chat system really went a long way to replicating the social aspect of a trade show. I was regularly bumping into friends and chatting with people about various parts of the show. I even virtually met the game’s creator, Google Developer Advocate Tom Greenaway. Hi, Tom!

I/O Adventure has a truly fascinating method of treating area: it doesn’t actually mind. You are allowed to quick travel everywhere through a menu that will transport you to each corner and space of interest. Your area is put away in the URL, so any bookmarks you make in the program are down and area bookmarks. This likewise made meetups simple: simply share a URL, and it will dispatch the game and stick you in the correct area.

Since this was an occasion for designers, it truly feels like Google needed you to hack your area through the URL. The URL in the location bar dubiously changes with each progression you take, yelling at the client “Hello! I bet your area is in here!” It turns out the URL is base64 encoded, and interpreting it uncovers a x/y arrange framework. Knowing that, you can craft your own URLs and suddenly, you can go anywhere! Feel free to walk through walls or get stuck in stuff. There is even an inaccessible island that you can only get to via a URL. If you ever get into trouble, the fast-travel system can teleport you back to safety.

Despite the fact that the I/O Adventure the world will in any case be online for the following month, the enormous drawback is that Google shut down the visit framework once I/O was finished. The organization said it wouldn’t have the option to direct the visit. You can still have fun hopping around the world though—if you want to try it yourself. Be sure to wave at me if you see me run by while I’m trying to 100 percent it.