Tuesday, 24 May 2022
You are here: Home LeBron and company finally failed the season. Next up is Durant’s Brooklyn? 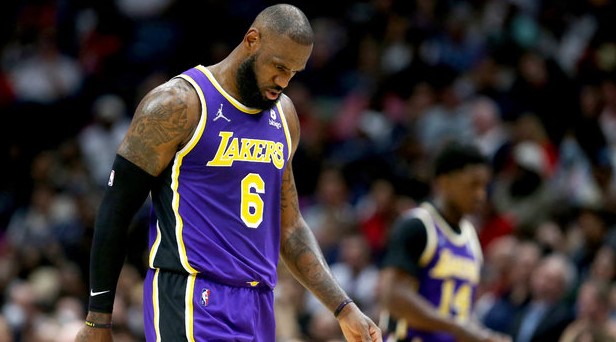 The two favorites of the season do not stand up to scrutiny.
On Wednesday night, the Lakers officially lost their play-in chances. With LeBron James, Anthony Davis and Russell Westbrook, the team failed to even place in the top 10 of the Western Conference. This not only speaks to the crazy competition in the NBA, but also that the concept of building a franchise around a few superstars is no longer a guarantee of success. After all, the second favorite of the season – “Brooklyn” – is also on the verge of an abyss. Breaking into the playoffs through the cabin in the play-in team Steve Nash will be very difficult.

Bad choices and injuries
San Antonio defeated Denver (116:97) and secured 10th place in the Western Conference. This finally became clear after the loss of the Lakers from the Phoenix (110:121). LeBron missed this game due to injury, and the efforts of Westbrook and Davis (the two scored 49 points) were not enough to break the resistance of last year’s finalists and leaders of the current championship. As a result, 37-year-old James will miss the playoffs for the fourth time in his career. This has happened previously with Cleveland in the 2003/04 and 2004/05 seasons, as well as in his first season with the Lakers (2018/19).

In 79 matches of the regular season, the Lakers won only 31 wins, although before the start of the season bookmakers predicted Frank Vogel’s team to win at least 53 games and a place in the top 3 in the West. It looked logical. Rob Pelinka made a strong selection, signing Russell Westbrook, Kendrick Nunn (who never played a game for the Lakers due to injury), Malik Monk, Carmelo Anthony and Avery Bradley. This is how an absolutely unique design developed, but many experts wondered if such a stellar team could find common ground. However, the same doubts arose two years ago. But Frank Vogel managed to win the title on the move, and despite the end of the season in the “bubble”, the Californians were objectively the best team of the tournament.

Then two superstars were enough, and Westbrook was also signed before this season. The 2017 MVP was brought into the team to offload LeBron in the regular season. Give the club the wild energy that will allow the Lakers to be in the top 4 with home floor advantage and keep James strong for the playoffs.

But it turned out differently. Westbrook turned out to be a man who failed to adapt to the new requirements. He still fiddled with the ball a lot and played poorly without it. This characteristic does not match with LeBron, who is used to always coordinating the game of the team. Another point is chemistry. Russell single-handedly failed a couple of endings, clearly spoiling the atmosphere in the team. And finally, protection. The strength of the Lakers over the past two years has been top defense. Westbrook and Carmelo fell out of that system, and that hit Vogel’s calling card.

That is, Westbrook played for almost 35 minutes, but practically dropped out in defensive actions, and also became less effective in attack: 18.5 points and 7.1 assists. He had worse performance only in his debut season. Plus added back problems. Of course, Nunn was also missing, who was supposed to give the team a balance. For a long time due to injury, Davis also flew out, having missed more than two months in total. LeBron missed a lot of games.

– I think a lot about what kind of team we could get if we stay healthy all year. What would we be, — said ESPN Davis. “If LeBron was healthy, Kendrick Nunn was healthy, I would play more games. These thoughts are running through my head. We put together this roster before the start of the season, everything looked good on paper, but we were not able to realize all this potential, given that someone was constantly relegated from the roster.

No protection
An equally difficult season is developing for Brooklyn, which bookmakers predicted first place in the East (55 wins). In fact, with three games left in the regular season, the Nets are in ninth place with 41 wins. In the playoffs, you have to fight your way through the play-in. Recall that in the play-in tournament, the seventh and eighth teams of each conference play each other, the winner of the match receives the final seventh seed number. The loser meets with the winner of the meeting of the ninth and tenth teams, the best in this confrontation receives the eighth seed.

Kyrie Irving’s anti-vaxxing stance (only recently cleared to play in Nets home games), Kevin Durant’s knee injury and missing over 20 games, John Harris’ second ankle surgery, James Harden’s scandalous trade to Phildelphia… In general, this season was held under the auspices of randomness. The Nets had 40 starting fives, which is a lot.

Only at the end of the regular season Nash managed to find some kind of balance. Durant and company have won nine in their last 15 matches. At the same time, the weak game in defense has not gone away. Brooklyn is only 25th in the league in defensive rating. This is primarily due to the fact that the Nets are no longer able to defend at a high level. Andre Drummond, Blake Griffin and Lamarck Aldridge should be archived. Under the ring, the team is absolutely not competitive. In fact, only Pati Mills, Bruce Brown (season opener) and Irving (when he wants to) defend on the team.

There are also problems in attack. In the face of Joe Harris, the team lost an elite sniper (he was the leader in the percentage of three-pointers in two of the last three seasons), and the roster is too short for a successful performance in the playoffs. So Nets fans need to prepare for the worst.