Friday, 12 August 2022
You are here: Home Lifestyle The Biggest Makeup Trends For 2022 Will Be From the Sixties 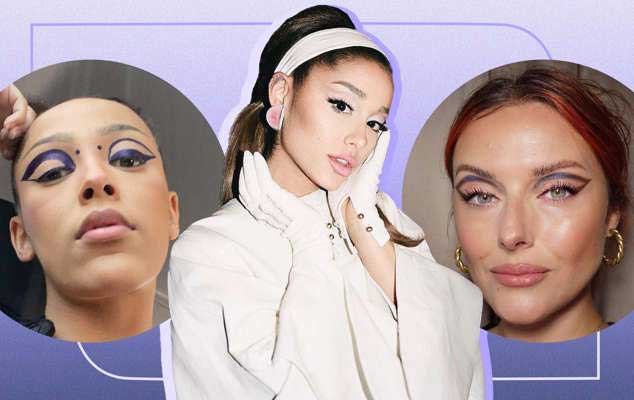 Scroll through beauty videos on Instagram or TikTok feed and you’ll find at least one makeup look with a cut crease, graphic eyeliner, or dramatic lashes. As it turns out, ’60s makeup has been having a major moment, and experts predict it isn’t going anywhere in 2022.

Back in the day, ’60s makeup was all about emphasizing the eyes via bold makeup looks, explains Dominique Lerma, the executive makeup artist at Omnia Brush. Just take a look at the icons of the era. Supermodel, Twiggy’s notable eyelashes walked so that falsies of future decades could run. Diana Ross’ bold, graphic winged eyeliner was a force to be reckoned with. And, of course, Elizabeth Taylor’s bonafide bright blue eyeshadow.

We aren’t surprised about this makeup revival. After all, good trends have a way of repeating themselves. We’re seeing a slew of celebrities, influencers, and makeup artists fully embrace this trend — just take Ariana Grande wearing pastel cut creases while promoting her new makeup brand, for example. “I’ve seen a big makeup wave of ’60s makeup throughout 2021, and it still feels like we’re just getting started,” says Ash K. Holm, a New York-based celebrity makeup artist.

Makeup artists believe that the comeback of ’60s-inspired makeup is due to the pandemic. “I feel that because most of our faces have been partly covered with the masks, that putting extra TLC in eye makeup application is where the rise of ’60s makeup trends comes from,” says Lerma. Even once mask regulations let up in the summer of 2021, we saw an uptick in bright and bold makeup trends as people were going out again due to the vaccination and social-distancing restrictions that allowed restaurants and other businesses to open back up.

On top of the pandemic, there are also so much more makeup products that make playing with eye makeup more accessible, fun, and innovative than during the ’60s. “It only makes sense that the ’60s would make a comeback being as that there are so many creative ways you can use lashes and liner to express yourself,” says Holm. Case in point: Lily Collins wore a “’60s French gamine eye” look, as Lerma calls it, during the season two screening of Emily in Paris.

In 2022, this retro style will take a more modern spin that feels fresh and youthful, says Jamie Dorman, a Manhattan-based celebrity makeup artist. “The main difference between the ’60s version and the current ones is texture,” she says. “In the ’60s, the only texture option was matte eyeshadow, but now we have a lot of varying texture options to choose from.”

Holm says that the best way to create a beginner-friendly ’60s makeup look is to do a graphic eyeliner choice with a negative-space cut crease. “One of my favorite ways to create a quick and easy ’60s look is to create a curved floating line above your crease to give the illusion of wider, more deep-set eyes,” she says.

When it comes to creating any graphic eyeliner look, Lerma says it’s all about taking it slow. “I know creating a detailed graphic eyeliner look can feel overwhelming, but don’t look at the whole staircase, take it a step at a time,” she says. Instead of creating a line in one fell swoop, Lerma suggests placing small dots to outline the shape of your graphic eyeliner and then going in with an eyeliner brush to connect the dots. “You can later go back and add on thickness, an extended wing, or whatever you want,” she says.

The right tools and products will also help make eyeliner application way easier. Lerma recommends the Omnia Brush Eyeliner Brush BOM-475 ($6, omniabrush.com) for its angled tip that offers exact precision. If you prefer an eyeliner with an applicator, Dorman recommends the Westmore Beauty Wing Effects Liquid Eyeliner ($21, amazon.com) for its ability to draw on precise lines.

VIDEO: 2022 Is Going to Be Sparkly, According to this Major Hair and Makeup Trend

As far as recreating ’60s eyeshadow, don’t be afraid to opt for a bright color. When it comes to application, Dorman says, “’60s eyeshadow emphasizes the round shape of the eye, so instead of using eyeshadow to wing out and lift the eye, use it to emphasize the socket shape.”

And what’s ’60s makeup without dramatic lashes? Holm says to opt for a rounded wispy eyelash to help recreate that Twiggy-inspired look. The KISS My Lash But Better in Blessed ($5, ulta.com) is an affordable pick. “I also like to take another pair of lashes, cut them into individuals, and apply to the lower lash line to give a 60’s Twiggy-like feel,” she says.

Ultimately, if you look at history during the ’60s, it was a period all about rebellion and revolution. So, the same rules apply in makeup — it’s all about being fearless, experimental, and bold.