Tuesday, 24 May 2022
You are here: Home Marshall vs. North Carolina Live Stream: How to watch NCAA Men’s College Cup Final Four on TV 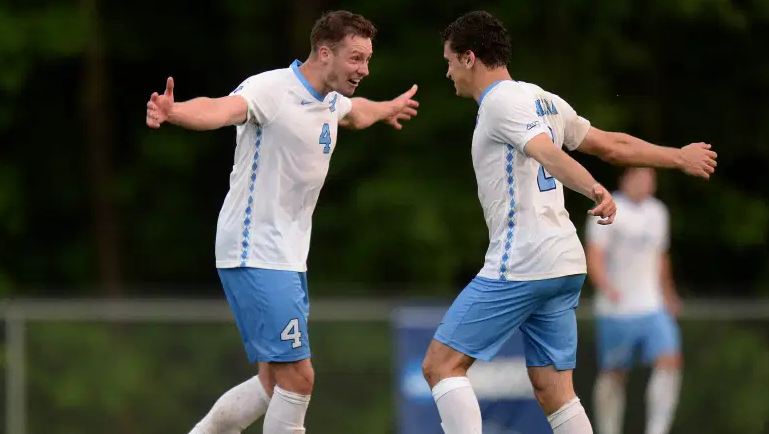 The no. 10th ranked Marshall Thundering Herd will play in their 1st NCAA Men’s Soccer Final Four on Friday when they take on the unseeded North Carolina Tarheels at WakeMed Soccer Park in Cary, North Carolina. The match starts at 6 p.m. ET and will be televised on ESPNU.

How to watch Marshall vs. North Carolina in College Cup

The tenth-ranked Marshall Thundering Herd (11-2-3) enter unchartered water this week when they head to the men’s soccer NCAA College Cup national for the first time, where they will take on the unseeded North Carolina Tarheels (9-4-4) in Thursday’s first national semifinal match.

Marshall advanced to the Final Four for the first time in program history with a 1-0 win over the defending national champion Georgetown Hoyas in the quarterfinal round on Monday.

Thundering Herd senior Jamil Roberts scored the game’s loan goal in the 70th minute – his third goal of the season and 17th of his career. Roberts was assisted by a cross from junior Vitor Dias.

Marshall junior goalkeeper Oliver Semmle had two saves in the win, including one in the last minute, to cement the team’s ninth shutout of the season.

“Our goal is to win a national championship so it is not a surprise for us,” said Semmle following the quarterfinal round win. “We want to go far, and I think we already went far. But, we are not done yet and we want to go and win the title.”

Marshall has gone on quite a run in their second-ever NCAA Tournament appearance. The Thundering Herd kicked of their tournament with a 2-1 overtime win over No. 23 Fordham in the second round before outlasting the top-seeded Clemson Tigers, 7-6, in penalty kicks.

North Carolina will be making its ninth appearance in the NCAA College Cup, which includes three appearances in the last five tournaments.

The unseeded Tarheels advanced to the Final Four with a comeback win over fifth-seeded Wake Forest in the quarterfinals.

Wake Forest scored the game’s opening goal in the 10th minute but was met by North Carolina’s equalizer just 32 seconds later, when senior Giovanni Montesdeoca found the back of the net at the 9:37 mark.

Senior forward Santiago Herrera scored the go-ahead goal in the 68th minute, which proved to be the game-winner in the Tarheels 2-1 victory.

North Carolina is 5-1-2 against teams ranked in the United Soccer Coaches poll this season, which includes a 3-0 record against top-five teams.

“We’ve put in a lot of work, and we believe we’re capable,” said Somoano. “Our goal is to go play on Monday [in the NCAA championship game]. We believe that’s possible. Why not? We’re here, we’ve put in the work. We’re as capable as anybody else left playing.”

North Carolina will be looking to take home their third national title and first since 2011. The Tar Heels lead all Division 1 teams with 26 wins in the last 13 NCAA Tournaments.

The winner of the Marshall-UNC game will take on the winner of No. 2 Pittsburgh vs. No. 3 Indiana on Monday night in the national title game.