Tuesday, 24 May 2022
You are here: Home Newer methods may boost gene therapy’s use for more diseases 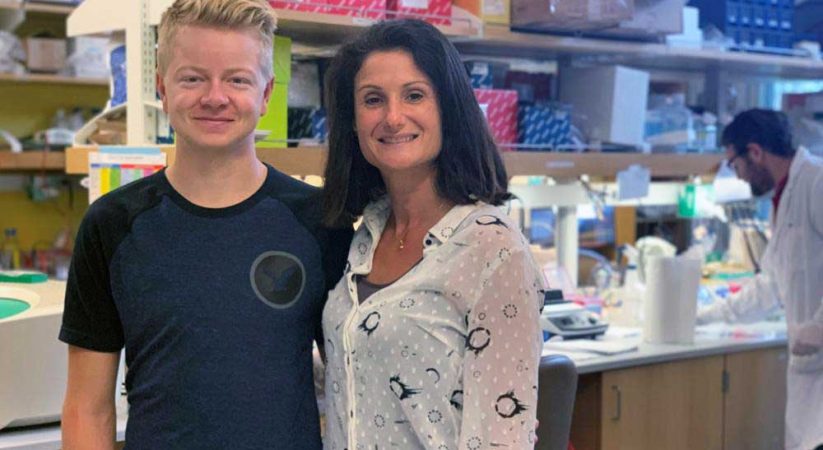 Jordan Janz knew his gamble on an experimental gene therapy for his rare disease might be paying off when he returned to work and a friend sniffed him.

“He said, ‘you have a normal smell, you smell good,’” Janz recalled. “And I’m like, ‘that’s probably the nicest thing you’ve ever said.’”

The 22-year-old Canadian man’s previous treatment required 40 to 60 pills a day and left him smelling like rotten eggs or stinky cheese. He was born with a flawed gene that left him unable to make a protein needed by virtually every organ in the body. Kids with this disease can throw up a dozen times a day, need eye drops every hour to prevent blindness and often kidney transplants before they’re adults.

Now, Janz and a growing number of others with rare diseases have hope of not just better treatments, but perhaps a cure. Gene therapy increasingly is being used to attack the root cause of their problems by supplying the DNA they lack.

Janz was the first person in one such study at the University of California, San Diego. He and two other participants no longer need the eye drops and pills that only delayed progression of their disease and left them smelling bad. The company that developed their therapy is testing it for several other diseases by simply adjusting what gene is supplied.

Other companies are doing the same, and U.S. health officials are working on guidance to encourage the trend.

“I am very excited for the field because I feel like we’re beginning to get to a critical mass,” where a single method or product can be deemed safe and then adapted for many uses, said Dr. Peter Marks, head of the U.S. Food and Drug Administration center that oversees gene therapies. “You’re essentially using the same rocket ship to put stuff into space dozens of times.”

NOT SO RARE DISEASES

In the United States, a disease is considered rare if it affects fewer than 200,000 people, said Ron Bartek, a board member of the National Organization for Rare Disorders and whose son, Keith, died of one — Friedreich ataxia, a progressive neurological condition.

There are more than 7,000 rare diseases and collectively, they’re not so rare — about 30 million Americans have one.

Seven gene therapies are approved in the United States and a few more are sold in Europe or elsewhere. In 2017, when the first ones were OK’d in the U.S., 854 companies were developing them. That grew to 1,085 by the end of last year, according to the Alliance for Regenerative Medicine, an advocacy group for the field. More than 400 gene therapy trials are underway now.

“It’s really been an exciting couple of years,” Bartek said. “We’re finally looking at the possibility of profoundly beneficial therapies” for many diseases.

There’s interest from not only small biotech firms but also universities and big companies such as Pfizer and Novartis, he said.

Gene therapies often aim to supply a gene people lack. The trick is getting the new one where it needs to be without triggering other problems.

Some therapies, such as ones for inherited forms of blindness, inject the treatment into the eye. A common method for others is to remove some of a patient’s blood cells, alter them in the lab to carry the desired gene, and return them through an IV.

What has scientists excited is better vectors — disabled viruses that ferry the gene into cells — that seem safer and more effective.

One, surprisingly, may be HIV, the virus that causes AIDS. Doctors recently reported that a gene therapy using modified HIV from London-based Orchard Therapeutics gave a working immune system to 48 babies and toddlers who were born without one. Avrobio, a Massachusetts company, also is using HIV in gene therapies it is testing for cystinosis, Janz’s disease, and several others.

BioMarin Pharmaceutical Inc. in California is taking a similar approach with a different virus called AAV for hemophilia, a blood clotting disorder, and several other diseases.

Janz lives in Consort, a Canadian village of 700 in Alberta. His mother called the first day of enrollment for Avrobio’s study under Stephanie Cherqui, a pediatrics expert at UCSD.

People with cystinosis are unable to clear cystine, a chemical that builds up in their cells and forms crystals that damage kidneys, eyes and other organs, and leads to muscle weakness, trouble swallowing and even breathing. The vomiting is so bad that many kids need a feeding tube placed in their stomach, and wind up being home-schooled because they’re teased by classmates and their medical needs are so complex, Cherqui said.

“When you meet these families, these children are suffering every day from the disease,,” she said. “I can’t even imagine. It’s terrible.”

Gene therapy offers hope of a one-time fix. The therapy doesn’t have to get into all cells to work, just enough of them to make sufficient amounts of the protein that removes cystine so it doesn’t build up.

Janz was treated in 2019 and said he feels “essentially cured,” though it will take longer to know if he really is, and he may need a kidney transplant someday because of damage done by his disease. Tests show that crystals in his eyes, skin and muscle have greatly decreased. Instead of 54 pills a day, he just takes vitamins and specific nutrients his body needs.

“I have more of a life now,” Janz said. “I’m going to school. I’m hoping to open up my own business one day” — a deli featuring charcuterie, prepared meats such as hams and sausages. It’s an interest he developed during years of frequent trips to Chicago as a young boy to try other treatments. He stayed so often at the Omni Hotel that the chef let him cook in the hotel’s fancy restaurant when he was 13. The staff even bought Janz a knife kit and his own chef’s hat, apron and shoes.

Gene therapy doesn’t work for everyone, it’s unknown how long any benefits will last, and safety remains a concern. In the past, a couple gene therapies that used different vectors triggered cancer in a few patients who received them.

“Every time we think we have overcome the safety issues, we continue to butt up against them,” the FDA’s Marks said. “I have confidence that we will work through them … but we can’t get too sure of ourselves.”

Marks and many other scientists think gene editing eventually may offer a long-lasting way to do gene therapy. Instead of just supplying a missing gene to cells, editing permanently alters a patient’s native DNA to insert a gene or knock out one that’s causing trouble.

Brian Madeux, a Phoenix-area man who is now 48, became the first person in the world to have gene editing tried inside his body in 2017 for a metabolic disorder called Hunter syndrome. Through an IV, he received billions of copies of a corrective gene and a genetic tool to put it in a precise spot.

But the therapy wasn’t potent enough to allow him or eight other patients to stop weekly IV treatments to supply the enzyme their bodies are unable to make.

Even though it didn’t give the hoped-for result, “I think the doctors have learned a lot from me,” Madeux said recently. “I felt that I could help other people” by furthering science.

“I took a shot, a chance that something could cure my disease,” he said. “I’m very happy that I did it.”

The Associated Press Health and Science Department receives support from the Howard Hughes Medical Institute’s Department of Science Education. The AP is solely responsible for all content.