Thursday, 11 August 2022
You are here: Home News Dana Borisova’s wild fight: she beat the blogger like a hammer, pulled her hair and won 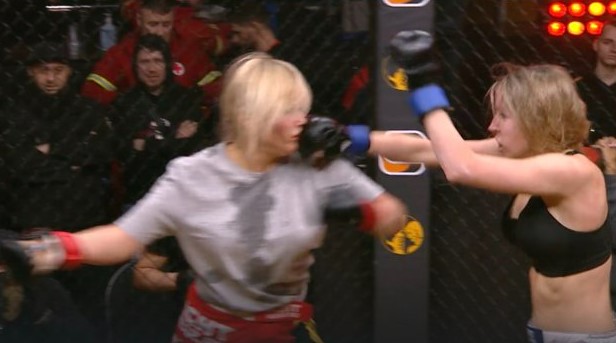 The Nashe Delo promotion continues to delight us with selected thrash content. This time – the fight of Dana Borisova. The rival of the TV presenter was the blogger, pharmacist Ekaterina Didenko, who became famous thanks to stories about how to save money at the pharmacy.

Last year, Borisova offended Didenko at the PERSONO OF THE YEAR award ceremony. Dana was the host there, and Ekaterina was one of the winners. “Didenko has a long-standing grudge against me,” Borisova said in a March interview with teleprogramma.pro. “A year ago, I hosted a ceremony that turned out to be a real sham. All places there were paid and distributed. Didenko took the stage at the end of the ceremony. The hosts were told not to joke with her.

I vaguely remember that episode. She said from the stage that she was a cheerful widow (in 2020, the incident with the death of Didenko’s husband, at Catherine’s birthday party, was widely publicized. – Approx. “SE”). Apparently she was unhappy. The organizers of the ceremony apologized to her later. At the press conference, Didenko’s girlfriends barked at me. So they squealed, they treated me with such hatred.

The press conference (in pop-MMA they are called conferences – there is no press there) really turned out to be unkind: Borisova and Didenko poured water on each other.

In an interview with Our Business, the 30-year-old blogger said that she has been in sports since childhood. The 45-year-old socialite, in turn, stressed: “Sport is not mine. I’ve never really been into it.” In 2017, information appeared that Dana had alcohol and drug addiction, which she later confirmed. The TV star went to a clinic in Thailand, where she underwent a six-month rehabilitation course. “My character has become much tougher,” Borisova noted. “I went through many years of [alcohol and drug use]. What I just did not pass. My character is much tougher than Didenko’s.”

Dana began to show a tough character as soon as the fight began. Telediva stunned her opponent with pressure, rushing to the attack. One blow, the second … And then Borisova fell. Not from the fact that she missed the blow, she simply did not keep her balance. The duel resumed, and Dana again flew forward. This time, Didenko collapsed to the floor. Then she rose – and fell again after Borisova’s attack. There was no knockdown either in the first case or in the second, Catherine was just fragile on her feet.

The ladies fought in small gloves and in an MMA cage. Wrestling was prohibited. Borisova and Didenko waved their hands, having no idea how to beat correctly, like a boxer. They went into battle without any tactics. Although Dana studied with a good coach – Svetlana Andreeva. But is it possible to teach a 45-year-old woman to box in two weeks? What happened in the cell can be described in one word: a fight. Borisova fought better at first. Much better. She even got her signature hit – a hammerfist. But what about Didenko? Never mind. The blogger, dumbfounded by the pressure of the opponent, helplessly put her hands forward – that’s all.

Borisova held the first round at the highest pace. The second one started the same way. Hammerfists, “mill” … But in the middle of the round, Dana clearly got hooked physically. And then Didenko joined in. That is, Ekaterina is the type of fighter who needs time to build up, at least 3 minutes. The pharmacist began to treat Dana’s body with blows. As a result, the TV presenter decided to spit out the cap – to bring down the pressure of the opponent. Tricky move. Another tricky move: in the clinch, she grabbed Catherine by the hair.

At the beginning of the third round, a very tired Borisova made it clear with a gesture: “Let’s cut.” Didenko rushed into the wheelhouse and did what she had not been able to do before: she hit her opponent hard in the face – exactly in the jaw. However, this only angered Dana: she answered with a multi-hit series. Beat on the steps – in the style of Vitor Belfort – and hit at least three times. Then there was only one flash from Borisova – when she hit with the right, and then fell, slipping. The ending was left for Didenko: the blogger crushed, pressed Dana to the net and delivered several punches to the body.

Result: Borisova’s victory by decision of the judges. Fair.

After the fight, the opponents did not shake hands. Didenko even said: “With haters like you, Dana, you need to do this.” Dana ignored those words. But she challenged Anastasia Volochkova, Anna Kalashnikova and Alena Kravets.

The show ended with a scandal: Didenko’s friends entered the cage and said that Svetlana Andreeva’s assistant had attacked them. “She beat us!” one announced. “No, she didn’t beat us,” another denied. “She just hit me in the face with a towel. For what? We generally stood and talked about our own. The girl came up and hit me with a towel. For what?” “And me with a foot!” explained the first. Then the girls demanded that the leadership of Nashe Dela fine Borisova for the behavior of her second. The head of the promotion Artur Harutyunyan promised to look into the situation.