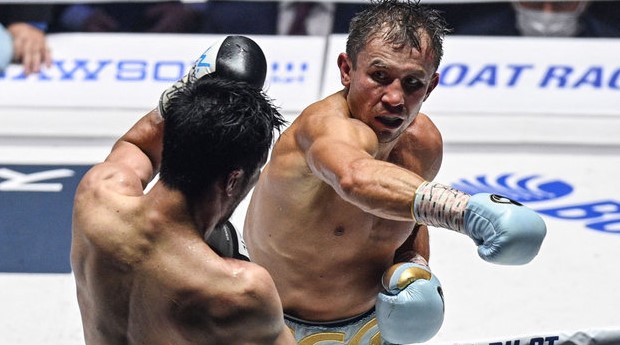 Just in Japan, Gennady Golovkin unified the middleweight belts by defeating Ryota Murata. But without the usual shine.
Boxing and brutal fights expose the nerves, exacerbate emotions when this is not enough. But the world is already so nervous and emotional, so, probably, the fight between Gennady Golovkin and Ryota Murata will not receive enough attention. And it was fun there.

For example, hematomas on the face of the Japanese, which began to form by the second round, although Murata took the beginning of the fight. Golovkin, who missed an unusual amount, was breathing very heavily, also looked slightly beaten by the third round. You can forget about the beginning of the fight, GGG had cases of an extremely slow start, and a pause of almost a year and a half cannot but affect when you turned 40 the day before entering the ring. Saul Alvarez, at 31, switched to a vegan diet before the fight, and Gennady does not seem to be in a hurry to change.

For starters: Murata (also with a long pause between fights) is younger, less shabby, taller and holds a punch well. He lost to Hassan Nzhikam controversially, suddenly fell apart against Rob Brant – but he took revenge on both. He is a thinking boxer and therefore went into battle with a plan. The plan was obviously to show Golovkin his age, and for that there was a jab from a distance (quickly stopped working), pace and a lot of body shots. Everyone understood that 40-year-old Gennady was not capable and would not train the way he did five years ago in Big Bear with Abel Sanchez. Flying to Japan, acclimatizing, trying to adjust his sleep to the new time zone, it’s no wonder he slept through the early rounds.

Another thing is surprising – how quickly Murata’s jab stopped working from a distance, but body attacks were quite effective. With the jab, moreover, it seems to me that he himself lost his rhythm and lost interest. He felt that he was getting other blows, and he stopped. In addition, the opponent began to move minimally and also turned on the left. And Golovkin has a heavy jab. There was just no speed at all, and that was part of the problem. The other was the inability to explode and keep pace in the round.

The third segment of the battle was very revealing. Gennady got involved in the work at the beginning, quickly realized the inefficiency, although he hit, took a break for a breather, and there he already picked up straight lines and side lines from the Japanese. A very unpleasant right straight Murata hit with a shift forward – taking a step at the same time – and alternating body and head as targets. So he shortened the distance and deprived the opponent of space for a response. Well, growth was well used. Hooks as counterattacks on the middle were obtained, since Golovkin lost his speed, but he could not restore the timing yet.

But by the 6th round, GGG didn’t really find himself – rather, he understood how to act in such a fight. Less hitting, more circling around. Do not try to throw punches, but wait for a pause in actions, and when, after another tough series, Murata will stand, pull on himself and close up a heavy hook. In the 7th round, Ryota was already just trying to survive. Bundles of hooks with uppercuts began to fly faster at Golovkin, but his strength ended after a couple of such bulks. And the Japanese recovered, tried to hit, but more – to find that balance between the desire to hit and not spend more energy than necessary.

The fight was hard, exhausting, and Golovkin understood that it was not worth dragging it out to the end. Therefore, in the 9th round, from the first seconds, he launched a flurry of attacks, to which Murata almost did not try to respond. Then Gennady remembered his age, began to gasp for air, switched to energy-saving mode, Murata completely mechanically went ahead to answer – something must be done, since the opponent does not hit – and stumbled upon a right blow, after which he sat down, and the seconds threw out the towel.

TKO in the 9th round. Two belts in hand, WBA and IBF . And again everyone will say that GGG is the God of War, the Mexicans are all for Golovkin, they need a third fight with Alvarez, Golovkin has not lost a single fight in his career… Seriously? In my opinion, the latter is a very harmful delusion. And most of all it harms Gennady Gennadievich Golovkin.

The fight with Murata was the right decision, because the physical resources of the body were enough for him. And the fees… They say Golovkin received 1.5 billion yen – that’s 12.3 million dollars. Murata – three times less, 500 million yen, that’s 4.1 million dollars. In Japan today, he receives more than for the fight with Saul Alvarez. There, the guaranteed fee was 3 million for the first fight and 5 million for the second. True, they say that he did not find bonuses for PPV from the second fight on his account and is suing GoldenBoy Promotions… But even Murata could build a fight differently – leveling Golovkin’s advantages. Sometimes age is just a number. But Bernard Hopkins boxed until the age of 50 because he rebuilt nutrition and physical training, changed weight, adapted his style – he became more cunning and economical in the ring, destroyed and dismantled opponents mentally before the fight, and then broke them tactically. George Foreman also rebuilt, but the example of the middleweight Hopkins, I think, is closer.

But if Golovkin values ​​the reputation of the God of War too much and wants to keep going back and forth, a very unpleasant discovery awaits him in the near future. So much can’t be missed. And the simple mortal cunning Saul Alvarez will feel too comfortable with him in the ring – if it comes to the third fight. Well, so far – it worked out.