Monday, 5 December 2022
You are here: Home News Leclerc is out of reach in Australia. Rivals of the Monegasque again drop out of the fight 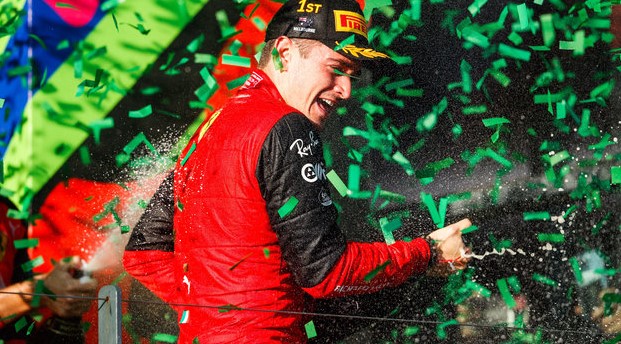 The Ferrari driver won an easy victory at the Grand Prix in Melbourne.

Melbourne triumphantly returned to Formula 1. A bright race at Albert Park ended with the victory of Charles Leclerc. The retirements of Monegasque team-mate Carlos Sainz and Red Bull leader Max Verstappen provided the Scuderia driver with an easy ride on the final laps in Australia.

In the last Australian Grand Prix before the pandemic in 2019 , Mercedes drivers Lewis Hamilton and Valtteri Bottas defeated their rivals in qualifying. Three years later, Formula 1 returned to Melbourne, but this time the Saturday session was ruled by other teams. Scuderia driver Charles Leclerc, although he complained about the blinding sun during his fast lap, was able to win the all-important pole at Albert Park. Monegasque left behind Red Bull: Max Verstappen showed the second result, Sergio Perez – the third. The main surprise of the qualification was Lando Norris, who started the race from fourth position. Brit’s partner and local hero Daniel Ricciardo started seventh. After a disappointing start to the season, McLaren showed great pace in Australia, which gave hope for a good result on Sunday.

“Silver Arrows” this time occupied only the third row of the starting grid. For the first time since 2014, Lewis Hamilton was left without pole position in Australia. Nevertheless, the Briton was ahead of his partner George Russell. The eighth time was set by Esteban Ocon, and Carlos Sainz and Fernando Alonso, who claimed victory on Saturday, rounded out the top ten. The Alpin driver was running ahead of Leclerc’s pole time, but a hydraulic problem caused Fernando to complete a quick lap in the wall. Sainz, on the other hand, was plagued by problems in the third segment: a red flag due to the relegation of Alonso did not allow the Scuderia pilot to complete his lap, and later the Spaniard’s car refused to start. As a result, on his last attempt, Carlos left with cold tires and naturally made a mistake.

The nightmare weekend for Sainz continued into Sunday. The Spaniard failed the start and rolled back deep into the peloton, missing Mick Schumacher in the fight for 13th line. However, the failures of the Scuderia driver did not end there either: on the second lap, Carlos, in an attempt to overtake the German, flew off the track and buried himself in the gravel. Sainz was no longer able to return to the track, and the Spaniard ingloriously completed the pursuit of victory at the Australian Grand Prix. The departure of Carlos led to the appearance of a safety car, however, many interesting events took place before the departure of the Ferrari driver.

At the start, Leclerc succeeded in a great breakthrough, and Verstappen could not attack the Monegasque. Perez not only did not compete for leadership, but also missed the third line: Hamilton immediately passed Norris and the Mexican. Russell also overtook Lando, but the Briton failed to reach Perez. Gasly burst into the top nine, while Alonso remained in tenth position. The safety car neutralized the race for several laps, and the fight continued at the restart. Perez returned to third place, easily overtaking the seven-time world champion. However, this was not the last exchange of positions between the Mexican and Mercedes in the race.

In the future, the race began to resemble the previous stages in Australia: local battles for positions took place in the peloton, but it was still difficult to overtake. Pilots also often made mistakes on the updated track. Schumacher missed out on Kevin Magnussen and Zhou Guanyu for 13th place due to his short relegation. Sebastian Vettel, who returned to the championship after covid, did not escape the passage on gravel, and Magnussen overdid it in the battle with Yuki Tsunoda and drove the ninth turn on the grass.

There was no sharp struggle in the group of leaders. Not the biggest tire wear allowed the athletes to make one pit stop in the race, and Verstappen was one of the first to go to the pits. Perez changed tires after two laps, and Leclerc and Hamilton did it even later. As a result, Charles and Max did not switch positions, and Lewis managed to get past Perez. The Mexican was not satisfied with the state of affairs, and Cheko immediately went on the attack on the British. Pérez made a risky overtake and eventually got ahead of Hamilton in a timely manner, as the safety car suddenly reappeared on the track.

Sebastian Vettel is unlikely to bring such an “Australian Grand Prix” to his asset. On Friday, the German could not really train due to technical problems, and on Saturday morning he crashed his car. On Sunday, the Aston Martin driver also had an accident. Vettel made a mistake and completed the run in the wall, which led to the pace car mode. Russell took advantage of this. The Briton changed tires and drove ahead of Perez and Hamilton. Alonso was also in the group of leaders, but the Spaniard delayed his pit stop until the last laps and, as a result, could not even stay in the top ten.

Another drama by Verstappen

On the second restart, the unstoppable Perez again went on the attack on the Mercedes, but this time on Russell. George kept the Mexican behind him for a long time, but Sergio eventually broke the British’s resistance and chased the leaders. Suddenly Perez’s bronze turned to silver: Max Verstappen retired for the second time in three races! The team urgently ordered the Dutchman to stop the car, the engine of which began to gradually catch fire. Max’s retirement paved the way for Leclerc to an easy victory at the Australian Grand Prix. As a result, the Monegasque won the second triumph of the season, adding to it a point for the fastest lap in the race. Charles’ opponents are self-destructing for the season, and now Leclerc has a gigantic advantage in the championship. The Ferrari driver is 34 points ahead of the nearest rival.

Sergio Perez finished second, who also spent the last laps of the race in a calm mode. For the first time on the podium in the “Mercedes” rose George Russell. It is he who now occupies the second line of the championship. The Briton was helped by the timely departure of the safety car, which was not very happy with Hamilton, who finished the race fourth. A duo from McLaren finished behind with Norris at the head, while Okon, Bottas and Gasley rounded out the top nine. One of the heroes of the race was Alex Albon, who started the race last and drove 57 out of 58 laps on one type of tire. Having made a pit stop on the last lap, the Williams driver did not miss Zhou, finishing tenth and earning a valuable point for the team.