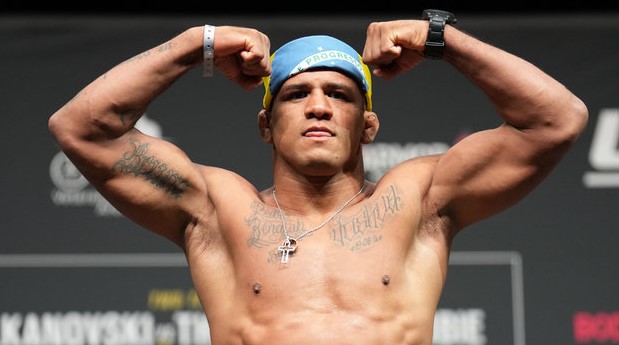 Gilbert Burns started in the UFC as a lightweight, won three fights in a row (twice earning a performance of the night bonus), and then became erratic, alternating wins and losses. In 2019, he decided to try his hand at welterweight – and he did the right thing: the Brazilian won four victories in a row, after which he received a title fight with Kamaru Usman. Burns started well – he knocked down the opponent, but Usman managed to rebuild and eventually knocked out Burns in the third round. In July 2021, Gilbert embarked on a new run for the title, winning by unanimous decision.

20-4 – Durinho has an impressive record, he is much more experienced than Khamzat Chimaev, but the Chechen is the favorite. Khamzat does not feel his opponents, he destroys them either in the fight or in the standing position, so now there is a popular opinion that he will deal with Burns without any problems. A few days before the fight, we asked Gilbert what he thought about this.

– You accepted the fight on a two-week notice against Alexei Kunchenko at the moment when you were talking on FaceTime with Ali Abdel-Aziz. Can you remember your reaction when you were told: “Now everything is official, you will fight with Khamzat”?

“Honestly, I asked for this fight myself. As soon as Khamzat beat Li Jianlian, I texted Ali: “I want to fight this guy.” There was a lot of talk about this fight, and in the end we got it. I have been fighting top fighters for many years, so the fight with Khamzat is just another difficult challenge for me.

– You said that you watched your fight with Kamaru Usman about a hundred times. And how many fights of Khamzat did you watch?

— I watched all his fights, so I know well what he is especially good at. But some of my preparations may surprise him. The team and I worked hard on grappling, takedown defense and prepared a good game plan. Now you need to implement everything planned in battle.

– Can you name the main disadvantage in Khamzat’s technique?

This guy is good at everything. He’s a high quality wrestler, he has heavy punches, so… Little experience is his main disadvantage. He fought a few fights, and his opposition was far from the strongest. So yes, this is its main disadvantage.

– And what is the main danger of Khamzat?

I think it’s his fight. I would also single out his heavy punches. This is where its main danger lies.

– Khamzat said that you are not a danger to him, that he will blow your head off, and then you will cry. What will you answer?

Well… Merry Christmas. We’ll figure it all out in the cage.

– You have said more than once that you went out to fight Usman angry. Does the fact that you are underestimated still make you angry, or have you learned to control your emotions after that defeat?

“I will never repeat that mistake again. Then I struggled with my emotions. Now I am completely calm. I know what I need to do in the octagon. I do not attach importance to betting odds. A lot of work has been done, it remains to make weight and fulfill our plans in the cage. I don’t pay attention to what they say around.

– You dominated on the ground in the fight with Stephen Thompson, but you could not submit him. Because of this, Brendan Schaub felt that you would have no chance of winning against a wrestler of the stature of Chimaev.

– Merry Christmas! I don’t care what he or other people think.

– Was it hard to find tall and at the same time strong sparring partners to prepare for Khamzat?

– Yes, I managed to pick up good wrestlers. The Russians helped me prepare, so I’m ready and I feel confident.

– Why did your sparring partners from Russia ask not to disclose their names?

– Yes, they asked not to disclose, so I will refrain from commenting.

But why don’t they want to?

– I do not know. They may have trained with Khamzat in the past. Perhaps they felt it would be better if their names were not publicized. I just have to respect their decision.

– Khamzat said that you fought with his jiu-jitsu coach Alan Nascimento about three times. And he won. Can you remember those fights?

– Yes. It was, in my opinion, 2005-2006, and then I lost to him, he had a minimal advantage. Then we started training together, and then in all training sessions I broke it. But what is the point of remembering the past… All this is left in the past. If he remembers those workouts… They ended up in my favor. It is what it is.

— In Sanford MMA you trained with Shavkat Rakhmonov.

— Yes, he held a meeting with us. This guy is very good. He’s one of the toughest guys I’ve ever trained with. A very strong guy.

– Statistics – the only argument in favor of Shavkat?

“I think he is superior in every way. He has better striking technique, he has very cool skills in wrestling and grappling – proof of his victory by submissions. Shavkat is a beast. He has great potential, he can become a champion.

– Does this mean that you are fully prepared for the fight with Chimaev?

– Yes, i am ready. I sparred with big middleweight guys who are taller than Khamzat. So I’m definitely ready for this fight.

– A fight is a fight, anything can happen, but how do you imagine your victory over Khamzat?

“I believe I will make it ahead of time. I am sure that he will come out charged, hoping to complete everything in the first round. But I’ll be more than ready for it. I think I will win ahead of schedule – in the first or second round.