Saturday, 26 November 2022
You are here: Home Other Sports FITE TV kicks off ‘WrestleMania 38′ weekend with these pre-order events 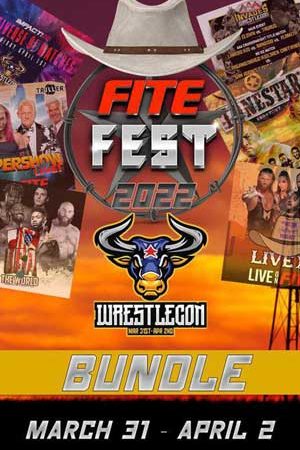 As the wrestling world prepares for this weekend’s special two-night edition of “WrestleMania 38” in Arlington, FITE TV offers of programming leading up and through the event.

“WrestleMania 38″ is set for Saturday, April 2 and Sunday, April 3 at AT&T Stadium. There’s no doubt that Brock Lesnar vs. Roman Reigns is the main event of Sunday’s show.

But there is plenty of content leading up to the main event on FITE TV. FITE Fest | WrestleCon Bundle

There are two major bundles that can be purchased on FITE TV to cover all the action. First will be GCW The Collective Bundle, which will cover 14 events.

Check out these options:

It is three days full of pro wrestling events and interviews. On March 31, April 1 and April 2, FITE Fest is live straight from Dallas. The Wrestlecon bundle features the Major Figures Podcast as Matt Cardona, Brian Myers, Chelsea Green, Swoggle and the rest of their cast of characters take to the stage live to discuss life and in and around professional wrestling, action figures and life itself.

The Wrestlecon Bundle includes a doubleheader featuring the first-ever AAA Lucha Libre live event as luchadors galore will wrestle, brawl and sail into the stratosphere, headlined by the Psycho Clown brawling across Wrestlecon against AAA and Impact Wrestling star Black Taurus while the AAA Cruiserweight Championship will be defended as Laredo Kid takes on global phenoms Bandido and Flamita.

On April 1, Ring of Honor is back live on FITE and presents Supercard of Honor 2022. There are six matches in the lineup and four of them are with titles bouts – ROH World Champion, ROH World Tag Team Championship, ROH Pure Championship and Interim ROH Women’s World Champion.

On Saturday, Wrestlecon closes out with the inaugural USA vs. The World event, as renowned British Cruiserweight Champion Michael Oku defends his title against former Impact World Champion Rich Swann while stars from Mexico, Canada and more seek to create an international incident live from Dallas.