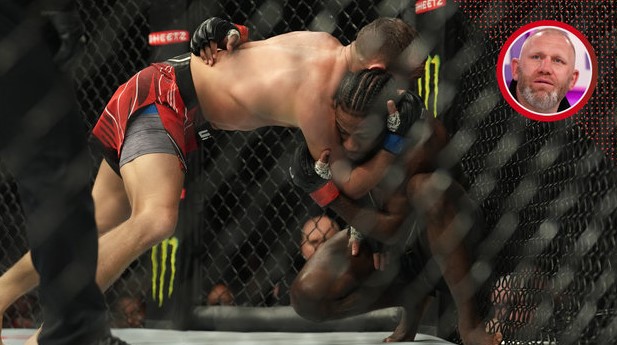 Petr Yan lost to Aljamain Sterling via split decision for the UFC bantamweight title. Peter was dissatisfied with the judge’s verdict. He stated in an octagon interview: “You robbed me!” He was supported by many fighters. Even UFC president Dana White opined that Ian won 3-2 in rounds. But there are also many who believe that Sterling deservedly won. Among them is Sergei Kharitonov . Sergey spoke out the toughest of all – he said that Petr “needs to train more, and not talk,” that Sterling “won by one wicket.” A lot of criticism poured out against Kharitonov, and he decided to clarify his position in more detail by contacting SE.

– A sea of ​​\u200b\u200bdirt, negativity poured, they say: “Kharitonov, you are nobody there and there’s no way to call you,” said the MMA veteran. – I even highlighted a few comments here. Alexander Karabakh writes: “You are a devil full of holes. Endured. Yang will break you.” Vladislav Melkov: “Old grandmother, completely beat off the cuckoo. Peter Yan will break you, old fart. Where is it taking you? No respect for you. You’re just a bag of shit.” Here I am challenged by a certain Albert Karmazyan (ex-trainer of the fighter Max Topor, boxer. – Approx. “SE” ). As I understand it, he is some kind of boxer. But a fighter from Yekaterinburg, from the RCC, writes – Asanbekov: “I ***** you, Seryozha. I’ll spoil you.” Anatoly Malykhin, our hero, says: “Where are you going?” That is, in his opinion, I am nobody at all, and he is a champion superhero. There is a lot of dirt – all different.

Nobody loves the truth. We have a big problem with education. When I had my first fight in 2000, many of the guys who are now writing nasty things to me went under the table. I am a friendly and respectable person, but I always try to tell it like it is. What I said in the interview, I will say it 10-20-30 more times.

Some people who train with Petya Yan in a team … For example, Petya got into a fight, and they: “Petya, you won. You just got sued.” They are digging a hole for him with such comments! Petya arrived in Yekaterinburg, and to him: “You won, Petya, it’s just that the judges didn’t give you the victory, so we’ll give you another car.” Or: “Let’s carry you in our arms.” This is what ruins it. It spoils him, because the man is a little off the ground. I say this so that he can hear me!

The first fight [with Sterling] is a handsome man. Then he did everything competently and beautifully, but he made a mistake – he doesn’t happen to anyone. Anyone can make a mistake, throw the wrong punch. Everyone, work in the same manner, go to the same training camp, work with the same guys, get stronger. And he, instead of getting stronger … The whole fight was dictated by Sterling. I’m not arguing that the first round is controversial. Really controversial. Sterling won the second and third rounds, Ian won the fourth and fifth. But after all, the champion here is a full-fledged one – Sterling. Jan was also a champion, but temporary. Sterling is weaker than Jan at least three times in all respects, but he did everything to win this fight. Everything was done beautifully and tactically correctly. No matter what anyone says, Sterling won this fight. And now these armchair experts, false friends, who tell him [Yan] that he won..

Petya needs to hear my words! And not only mine, but also many competent coaches who, excuse me for the expression, will not lick his ass, saying: “You are handsome. You won.” He should have a coach who will give you a hat. Instead of engaging in all this advertising nonsense, incomprehensible promotion, be silent, train hard and prove everything not with words, but with deeds. What did he achieve by saying all sorts of different nonsense before the fight? And he was also asked to pay attention to the fact that Sterling is not such a gift as he thinks. One said, and then a second and a third, but he did not read it. Sterling prepared and did his job. And Petya, apparently, was charged to strike. I thought I was going to knock him out with one punch. But it turned out that the real favorite, whose victory I did not even doubt, lost to a man who had no chance. You watched their first fight. It hurts and hurts me now that we had a UFC champion belt, but now there is not a single belt. There is no UFC champion from Russia now.

If Peter hears me, he will train twice as hard and come back twice as strong, defeat the man they give him before Sterling, and then tear him apart. That is, if he hears me. And if he will be the same: “Yes, I am so strong, and so we will win, and so everyone carries me in their arms” … He needs to get off the ground.

I communicate with the guys who are on his team. With the same Denis Lavrentiev, who comes every year and performs at Parus. With the same Vadim Elantsev, who helps Petya, invited him to an event where I spoke.

To be honest, Petya and I then (at the Sail tournament in November last year. – Approx. “SE” ) did not even communicate, did not even greet him, because Petya still had old questions about me. If you remember, he and [Anatoly] Malykhin posted a fake Mostak post on social networks (in November 2020, after Kharitonov reconciled with Adam Yandiev. – Approx. “SE” ). Petya was informed [that the post was fake], and Petya, to his credit, removed him from social networks. He realized it was fake. But it would be right if he said: “Guys, this is a fake, and now I’m cleaning it all up.” And he just took it away, you know? He exhibited, and then removed, and it turned out that people took it all seriously.

By the way, I corresponded with one guy today, he also trained with Petya. I won’t give my last name. He first wrote me nasty things. But I answered him, and he understood me, adequate. I really want to focus on those who did not serve in the army, on those who are now training … You travel to different camps, to all kinds of AKA … We did not have these conditions. We just went out and fought, not bargained, saying we were ready to fight for $1,000, $2,000. I fought for 1000 rubles. For food, by and large, he fought. I can safely say that I have gone through this path from and to – from poverty to the heights that I have reached today. I am not saying that I am a top fighter, but nevertheless I have the right to express my point of view. When they called me and asked about the fight between Petr Yan and Aljamain Sterling, I said it like it is. Although I could do Note. “SE” ). I spoke sharply because I want him to hear me. I see that star disease is present in his behavior.

Say, the words of Jan before the fight – to promote the fight? Wait, Ilya. In Russia, everything is perceived as follows: if you say, do it. Remember that my situation with Adom Yandiev. How many people then poured dirt on me! Remember, yes? I understand these people and do not blame them at all. I criticized myself, maybe in the depths of my soul. But at that moment I decided to do so [make peace with Yandiev]. I’m not saying it’s correct. I took such a step that there were no nationalist cases.

So once said, you have to do it. Especially in sports when you say you’re going to bust Sterling like a hot water bottle. So go ahead and prove it. He is a champion and you have to be head and shoulders above to win.