Friday, 12 August 2022
You are here: Home Science Discovered a dusty object that links galaxies and quasars in the cosmic dawn 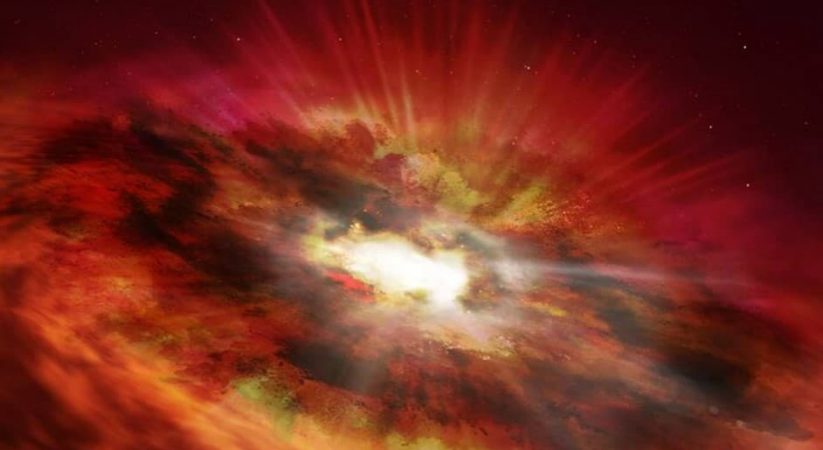 Ever since the presence of supermassive black holes in the early universe was discovered (only 700 million years after the Big Bang), with masses equivalent to hundreds of millions of suns, the astronomical community has tried to understand what is the process that causes appear.

Although theoretical astrophysics and computer simulations predict the existence of fast-growing black holes, from early galaxies with a large content of dust and gas together with a great deal of star formation activity (known as starburst galaxies ), never they had previously been observed in their early stages.

Now a team of astronomers reports in the journal Nature the discovery of an object, nicknamed GNz7q , that is the first fast-growing black hole detected in the early universe.

Archival data from the Hubble Space Telescope ‘s Advanced Camera for Surveys has helped determine that it existed only 750 million years after the Big Bang .

Current theories predict that supermassive black holes begin their lives in the dusty cores of starburst galaxies before expelling surrounding gas and dust and emerging as extremely luminous quasars (quasi-stellar radio sources). They are very rare, but both these galaxies and quasars have been detected in the early universe.

The team believes that GNz7q could be the first example of a ‘missing link’ between these two classes of objects, the precursor to the supermassive black holes we observe in later times. “The properties of GNz7q across the electromagnetic spectrum are in excellent agreement with predictions from theoretical simulations,” says Seiji Fujimoto , an astronomer at the Niels Bohrs Institute at the University of Copenhagen, Denmark, and lead author of the discovery.

While other interpretations of the team’s data cannot be completely ruled out, the observed properties of GNz7q surprisingly fit theoretical predictions.

The object’s host galaxy is forming stars with a mass equivalent to 1,600 solar masses per year and it shines at ultraviolet wavelengths , but is observed very faintly at X- ray wavelengths .

The authors interpret this (as well as the brightness of the host galaxy at infrared wavelengths) to suggest that GNz7q is a fast-growing black hole still obscured by the large amounts of gas and dust that host star-forming regions in the universe. galaxy core.

In addition to the object’s importance in understanding the origins of supermassive black holes, this discovery is important for its location in Hubble’s GOODS North field. Despite being one of the most scrutinized areas of the night sky, GNz7q has remained unnoticed until now.

Detecting its presence, hidden in plain sight, was made possible by the exceptionally detailed, multi-wavelength datasets offered by GOODS-North , an astronomical survey that combines deep observations from several space and ground-based telescopes.

Without this wealth of data, GNz7q would have been easy to miss, as it lacks the distinguishing features typically used to identify quasars in the early universe. Now, the team hopes to systematically search for similar objects by conducting surveys with the high-angle resolution cameras of the James Webb Space Telescope (JWST) launched on December 25.

“The sensitivity, sharpness and infrared spectral range of the JWST will be essential to detect objects similar to GNz7q and to be able to clarify the initial phases of the formation of supermassive black holes in the early universe, when it was 5% older than it is today,” he says. co-author Luis Colina , researcher at the Center for Astrobiology (CSIC-INTA) and member of the JWST Mid-Infrared Instrument (MIRI) team.