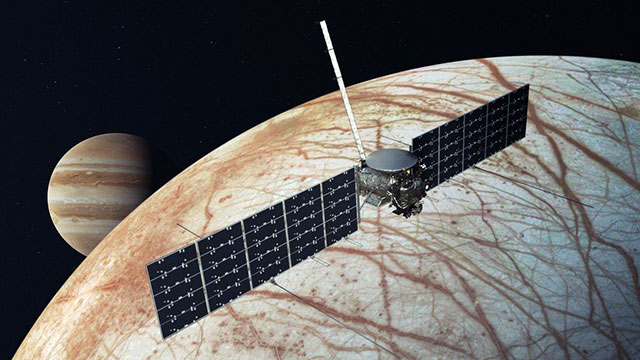 A mission to study a moon of Jupiter that could be home to extra-terrestrial life has been given a launch date.

Nasa is sending a spacecraft to the icy world of Europa, which holds an ocean under its frozen outer shell.

Scientists have long regarded the moon as one of the most promising targets in the search for life elsewhere in our Solar System.

The Europa Clipper spacecraft will now launch to the jovian moon in October 2024, arriving in April 2030.

The spacecraft was to have launched on Nasa’s Space Launch System (SLS) rocket. But the space agency is reported to no longer be considering that launch vehicle.

The details were disclosed by the mission’s project scientist, Dr Robert Pappalardo, during a virtual meeting of Nasa’s Outer Planets Assessment Group (Opag).

“We now have clarity on the launch vehicle path and launch date,” Dr Pappalardo, who is based at the space agency’s Jet Propulsion Laboratory in Pasadena, California, told the meeting.

Interest in the moon as a potential habitat for extra-terrestrial life was given a boost in the 1990s, when Nasa’s Galileo spacecraft provided evidence that Europa harboured an ocean of liquid water beneath its outer shell.

Europa probably has a rocky core surrounded by around 80km (50 miles) of liquid water covered by a shell of water-ice that’s roughly 20km (12 miles) thick.

“Europa’s about the size of Earth’s moon, yet we think it contains twice as much water as all of Earth’s oceans,” Dr Pappalardo said during a virtual talk organised by Arizona State University (ASU) last week.

Discussing the moon’s potential for life, he said: “At the bottom of the Earth’s oceans are places where water and rock interact, where water seeps down, contacts hot rock and emerges charged with chemical nutrients – reductants.”

When these reductants get together with other chemicals called oxidants, they react, he explained.

Dr Pappalardo said these reactions could, “potentially power life at the ocean floor of Europa – even where there is no light to allow for photosynthesis”.

The spacecraft will be able to analyse chemicals in frozen water that has welled up to the surface from beneath the ice shell. It might also be able to sample the contents of water plumes that seem to be spurting out into space from locations on the jovian moon.