Friday, 12 August 2022
You are here: Home Science The company Rocket Lab recovers a rocket in mid-flight with a helicopter for the first time 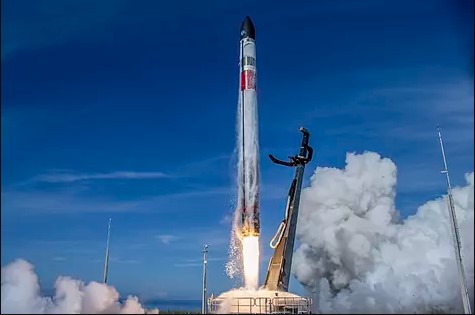 One of the keys to making space travel cheaper is to reuse the expensive components of ships and rockets, something that several private companies have proposed. If SpaceX (by Elon Musk) and Blue Origin (by Jeff Bezos) have managed in recent years that the first stage of their rockets return to Earth and land in a controlled manner after takeoff (although only SpaceX does it on a regular basis) , another company, Rocket Lab, has just taken another important step towards the recycling of rocket parts: a helicopter has captured one of the phases of a rocket after launch for the first time in full descent.

The mission, dubbed “There And Back Again,” was launched on Tuesday from New Zealand’s Mahia Peninsula with the goal of putting 34 small satellites into orbit at 500 kilometers.

The rocket used is called Electron and measures 17 meters in height and 1.2 meters in diameter. What was intended yesterday was that after launch, the first phase of the rocket (the first to detach and therefore fall to Earth after takeoff) would be captured in full parachute descent by a Sikorsky S-92 helicopter, which used a hook to catch the component at an altitude of about 2,000 meters.

Not everything went according to plan. After grabbing the parachute, the helicopter pilot detected a load anomaly with respect to the tests carried out previously and decided to release this part of the rocket, which ended up falling into the ocean. The component was recovered by the company’s ship and was taken to the company’s facilities to assess whether it will be able to fly again.

“Bringing a rocket from space and catching it with a helicopter is a kind of supersonic ballet,” Rocket Lab founder and CEO Peter Beck has compared after the successful mission. “A lot of factors have to align and a lot of systems have to work together seamlessly, so I’m incredibly proud of the ‘stellar efforts’ of our recovery team and all of our engineers who made this mission and our first capture were a success”, summarized the CEO of this company in a statement, which considers that the successful operation is a milestone to make its Electron rocket a reusable vehicle that allows them to launch more frequently and cheaper.

Engineers will now review the mission to determine what changes and procedures will be made for the next helicopter test.

Previously, Rocket Lab had done other test missions in which it had achieved controlled landings in the ocean. The company is based in California (USA) but usually launches from New Zealand.