Tuesday, 16 August 2022
You are here: Home Science They find fossils of three of the largest animals in history at 2,800 meters in the Alps 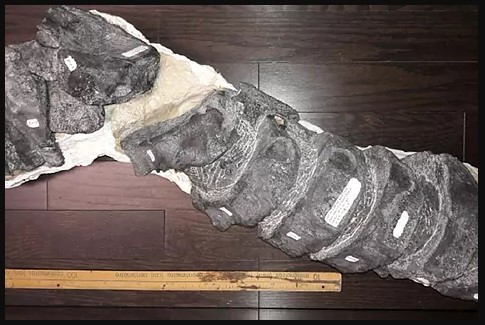 A team of paleontologists has discovered sets of fossils representing three new ichthyosaurs – giant marine reptiles now extinct – that may have been among the largest animals that ever lived, with the particularity that they have appeared in the Swiss Alps at about 2,800 meters of altitude.

This is explained in a peer-reviewed study published this Thursday in the Journal of Vertebrate Paleontology. Unearthed in the Swiss Alps between 1976 and 1990, the discovery includes the largest ichthyosaur tooth ever found. The root width of that piece is twice as large as any known aquatic reptile; the previous largest belonged to an ichthyosaur 15 meters long.

Study co-author Heinz Furrer of the University of Zurich, Switzerland, was part of the team that recovered the fossils during geological analysis in the Kössen Formation of the Alps. More than 200 million years earlier, rock layers still covered the seabed. However, with alpine folding, those remains have ended up at an altitude of about 2,800 meters.

Martin Sandler of the University of Bonn, Germany, and lead author of the paper, hopes that “perhaps there are more remains of the giant sea creatures hiding under the glaciers.” “Bigger is always better. There are clear selective advantages to large body size. There were only three groups of animals that had masses greater than 10 or 20 tons: long-necked dinosaurs (sauropods), whales, and the giant Triassic ichthyosaurs.”

These monstrous 80-ton reptiles navigated Panthalassa, the world ocean that surrounds the supercontinent Pangea during the Late Triassic, about 205 million years ago. They also made inroads into the shallow Tethys seas on the eastern side of Pangea, as the new findings show.

Ichthyosaurs first arose in the wake of the Permian extinction event about 250 million years ago, when around 95% of marine species became extinct. The group reached its greatest diversity in the Middle Triassic and some species persisted into the Cretaceous. Most were much smaller than ‘S. sikanniensis’ and similarly sized species described in the paper.

Roughly shaped like contemporary whales, ichthyosaurs had elongated bodies and erect fins. Fossils are concentrated in North America and Europe, but have also been found in South America, Asia, and Australia. Most of the giant species have been unearthed in North America, with few finds in the Himalayas and New Caledonia, so the discovery of more giants in Switzerland represents an expansion of their known range.

Yet so little is known about these giants. Tantalizing evidence from the UK, consisting of a huge toothless jaw, and from New Zealand suggests that some of them mediate like blue whales. An 1878 paper credibly describes an ichthyosaur vertebra as 18 inches in diameter, but the fossil never made it to London and may have been lost at sea.

These new specimens probably represent the last of the leviathans. “In Nevada we see the beginnings of the true giants, and in the Alps the end,” says Sander, who also co-authored a paper last year on an early giant ichthyosaur in Nevada, United States. “Only medium to large-sized dolphins and killer whale-like shapes survived into the Jurassic,” he notes.

While the smallest ichthyosaurs normally had teeth, most known giant species appear to have been toothless . One hypothesis suggests that instead of grasping their prey, they fed by suction. “The giant bulk feeders must have fed on cephalopods. The toothy ones probably fed on smaller ichthyosaurs and large fish,” Sander suggests.

The tooth described by the paper is only the second instance of a giant toothed ichthyosaur; the other is the ‘Himalayasaurus’, 15 meters long. These species likely occupied similar ecological roles to today’s sperm whales and killer whales. In fact, the teeth are inwardly curved, like those of their mammalian successors, indicating a grasping mode of feeding conducive to capturing prey such as giant squid.

The two sets of skeletal remains, consisting of one vertebra and 10 rib fragments, and seven associated vertebrae, have been assigned to the family Shastasauridae, which contains the giants Shastasaurus, Shonisaurus and Himalayasaurus. Comparison of the vertebrae from one set suggests that they may have been the same size or slightly smaller than those of ‘S. sikkanniensis’.

These measurements are slightly skewed by the fact that the fossils have been tectonically deformed, that is, literally flattened by the movements of tectonic plates whose collision led to their movement from an ancient seabed to a mountain top.

Known as the Kössen Formation, the rocks from which these fossils are derived were once at the bottom of a shallow coastal zone, a very wide lagoon, or a shallow basin.