Tuesday, 24 May 2022
You are here: Home Simone Biles makes gymnastics return at U.S. Classic, knowing she has more to give 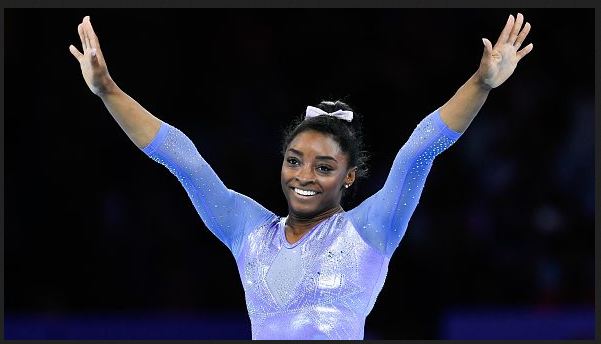 At the end of Simone Biles‘ most recent gymnastics meet, she lifted five gold medals from around her neck in an image shared around the globe.

That was at the October 2019 World Championships in Stuttgart. Biles performed at the peak of her powers, but it was believed to foreshadow a farewell tour. Curtains were to fall in August 2020 in Tokyo.

“Everybody has to end it some time,” she said that autumn evening in Germany, after upping her career world champs medal counts to records of 25 total and 19 golds. “You can’t keep going for the rest of your life.”

On Saturday, Biles competes for the first time in 587 days at the U.S. Classic in Indianapolis (7 p.m. ET, NBCSN, NBCSports.com/live and the NBC Sports app). It’s a tune-up for the U.S. Championships and Olympic Trials, both in June.

She is the last American (global?) sports megastar to return to the field of play during the pandemic. Biles is all but assured a place on the U.S. team for Tokyo before she salutes a single judge, so these meets are about ramping up for the rescheduled Tokyo Games that open July 23.

“It’s more stressful whenever I go out and compete,” Biles told NBC in February. “It’s just scary. Because I go out, and I’m like, can I do it again? Can I be this good? And can I repeat what I did last year, last time, last Olympics?”

Biles never felt so prepared for a season of spring and summer meets as on that March 2020 morning. She entered her family’s gym, the World Champions Centre in Spring, Texas.

Biles checked her phone as she gathered grips to mount the uneven bars. She saw a text from one of her older brothers: the Olympics are postponed. Biles teared up. Could she put off retirement for an extra year?

Training partner Jordan Chiles was there.

“She was saying she was done,” said Biles’ mom, Nellie. “She could not see herself hang on for another year.”

Biles was out of the gym for seven weeks due to pandemic measures. She chose to return.

“What motivates me is to strive to be better than I was before,” she said.

Biles turned 23 the week before the Olympic postponement. While not the oldest U.S. elite gymnast, she is older than every previous female U.S. Olympic gymnast since 2004. She would be the oldest American woman to compete in an Olympic all-around final since Kathy Johnson in 1984, according to Olympedia.org.

Women’s gymnastics was a teen-dominated sport from the 1970s until the last few years. Biles is the only non-teen to win a U.S. all-around title since 1971.

Others recently excelled in their 20s and beyond, from Aly Raisman to 45-year-old Oksana Chusovitina (going to her eighth Olympics this summer) to the current women of Japan, the first nation without a teen on its Olympic team event roster since 1964.

Biles returned to the gym last May, and the aches, pains and soreness were there. Her recovery is slower than in past years. Daily naps — two hours is the rarely achieved goal — are essential.

Last winter, another gymnast asked how long she’s been in the sport. Seventeen years, Biles answered.

Biles compared one year on a gymnast’s body to five years on somebody else in wear and tear. The nation’s best compete at a handful of meets every year, but training is daily. It’s 34 hours per week for Biles.

“But I feel stronger this year than last year, physically, mentally,” Biles, who since Rio cracked a rib, broke at least one toe and won world titles with a kidney stone, said in February.

That sentiment manifests in a vault that no woman has performed — a Yurchenko double pike. Biles plans to do it in competition before the Olympics. It could be the fifth “Biles” skill named after her in the sport’s Code of Points among floor exercise, balance beam and vault.

As Biles’ father, Ron, said, “She does some crazy stuff.”

When she retires, which could be this summer or in 2024, Biles wants to be remembered not just for taking gymnastics to new heights.

“Also for making a change for the newer generations to come, so that they feel comfortable entering the sport,” she said.

Biles came forward as an abuse survivor in January 2018, during a near-two-year break from competition. Since, she used her platform to hold people and organizations in power accountable, most notably USA Gymnastics.

Biles has four meets from now through August after not competing at all for 19 months. At the end of the final one, in Tokyo, she may well be photographed lifting five gold medals once again.

“I’m just doing what I love and sharing that with the world,” she said.