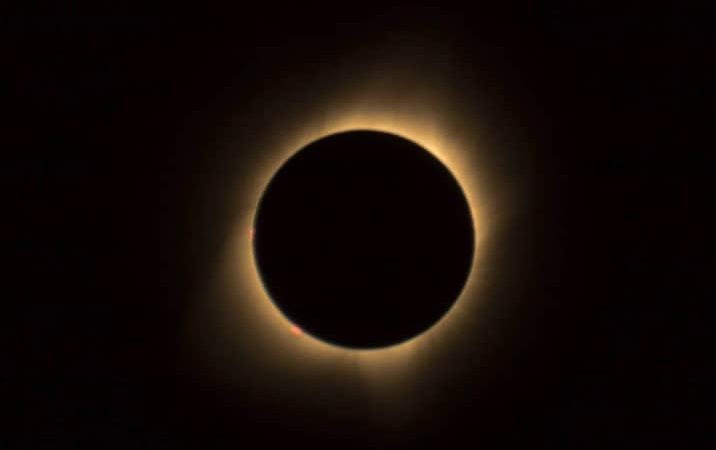 This Saturday, April 30, 2022 , a partial solar eclipse will occur between 8:45 p.m. and 12:38 a.m. ( Spanish peninsular time) although it will only be visible from southern South America and the Pacific .

The occultation percentage will reach levels of 50% from some points in Chile , although it will coincide with sunset.

The solar eclipse will be visible in Chile , Argentina and some regions of Uruguay , Paraguay , Bolivia , Peru and Brazil . Also in the Falkland Islands and in parts of the South Pacific Ocean and the Antarctic Ocean .

To see the eclipse it is important to bear in mind that you should only look at the Sun directly if you have an approved filter or ‘eclipse glasses’ that must be approved by the European Community for solar observation (opacity index 5 or greater) and must be used according to the instructions printed on them.

The Sun can also be safely observed by viewing its image projected on some type of screen placed in the shade.

One wonders why there aren’t eclipses more often . This is because the Moon’s orbit is slightly tilted relative to the plane of Earth’s orbit.

If the Moon’s orbit around the Earth were not tilted, there would be a solar eclipse every new moon. But this tilt between the orbits is about 5 degrees. As eclipses require the almost perfect alignment of the three stars (Sun, Moon and Earth), they only happen a few times throughout the year.

For its part, on May 16 there will be a total lunar eclipse . The satellite will turn red and this blood moon can be seen from all over Spain just before dawn: the totality phase will begin at 05:26 and end at 06:50 (peninsular time).

It ‘s the first total eclipse we’ve seen in Spain since July 2019 , and there won’t be another one until October 2023, so don’t miss it