Alistair Overeem has released his first statement since parting ways with the UFC.

On Thursday via a statement on Instagram, the longtime heavyweight contender confirmed reports of his release from the organization he’s competed for since 2011, stating that “The final run has come to an end, but what a run it has been.” 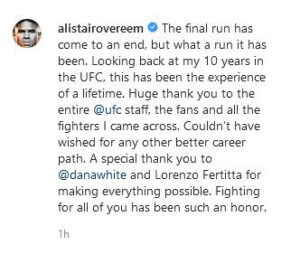 Overeem’s release came in the wake of a second-round TKO loss to Alexander Volkov in February, which snapped a two-fight win streak for “The Reem.” During his time with the UFC, Overeem compiled a 12-8 record and competed once for the promotion’s heavyweight title, losing to Stipe Miocic at UFC 213. He holds notable wins inside the octagon over Fabricio Werdum, Mark Hunt, Junior dos Santos, Frank Mir, and Brock Lesnar, in addition to numerous high-profile victories competing for Strikeforce, DREAM, PRIDE, and RINGS.

In recent years, he had stated in interviews that his goal was to earn another shot at a UFC title, a goal that was derailed by losses to Volkov and Jairzinho Rozenstruik.

“Glancing back at my 10 years in the UFC, this has been a truly mind-blowing experience,” Overeem composed. “Much obliged to you to the whole UFC staff, the fans and all the contenders I ran over. Couldn’t have wanted for some other better vocation way.

“Battling for every one of you has been such an honor, Overeem added.”

Overeem, 40, has likewise had achievement in kickboxing, having won a K-1 World Grand Prix competition in 2010.