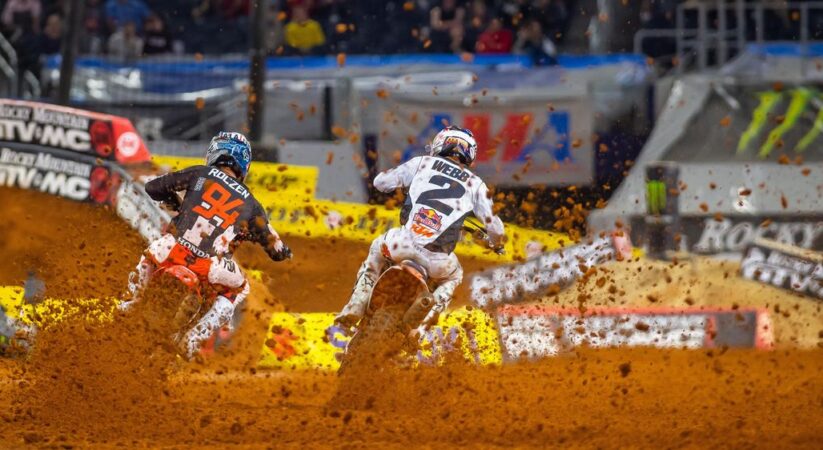 After a two-week break, the AMA Monster Energy Supercross Series will return Saturday for the finishing kick of its 2021 season with Round 13 at a new venue, Atlanta Motor Speedway.

The 1.54-mile track in Hampton, Georgia, that is famous for its NASCAR races will make its debut as a Supercross venue by playing host to three consecutive rounds that will mark the first outdoor events held in the Atlanta area in nearly 30 years. Fulton County Stadium was the host of 14 Supercross events from 1977-92.

Supercross since has moved to the Georgia Dome (1993-2017) and then Mercedes-Benz Stadium, where Cooper Webb and Ken Roczen won the past two years.

Webb and Roczen will enter Atlanta in a head-to-head battle for the Supercross 450 championship with defending series champion Eli Tomac lurking in third. Since feuding with Roczen at Daytona, Webb, the 2019 series champion, has won three consecutive rounds at Arlington, Texas, to seize the points lead from Roczen, who has three victories this year in pursuit of his first 450 title.

Our dirt track is starting to come along nicely! 😏 #SupercrossLIVE / #MonsterJam pic.twitter.com/Q92aqlsZQ9

“Cooper Webb has gotten the best of Ken Roczen,” NBC Sports analyst Ricky Carmichael said on the most recent NASCAR America Motormouths episode. “I’m interested to see for Ken how this two-week break has been. He sat out the motocross championship in hopes that would be the key ingredient for this season’s Supercross to finally get him that championship.

“Cooper Webb is a warrior, a fighter. He will wear you down. He plays games with you and just irritates you. He’s got every facet of the game figured out, and that’s what makes him so tough. It always seems like he races with a chip on his shoulder. If his bike isn’t working right, he doesn’t let that faze him.

“It’s go time for Ken Roczen. There are no more excuses left, and he has to get after it.”

The Atlanta round has been a decent championship barometer with the event winner also winning the 450 championship 25 times in 43 seasons, including 10 consecutive from 1998-2007.

Here are the pertinent details for watching Round 13 of the 2021 Supercross season Saturday:

(All times are ET)

BROADCAST/STREAMING SCHEDULE: TV coverage of Round 13 will be shown live at 3 p.m. ET on NBC. The event will be streamed on NBCSports.com and the NBC Sports App.

Live coverage also is available via the exclusive streaming coverage formerly on NBC Sports Gold’s Supercross and Pro Motocross Pass. That has moved in 2021 to Peacock Premium, which is available for $4.99 per month.

Round 1: Justin Barcia makes it three consecutive victories in the season opener

Round 2: Eli Tomac improves his start, wins first Supercross event on a Tuesday

Round 4: Ken Roczen rebounds for first victory of season

Round 5: Two consecutive in Indy for Ken Roczen

Round 6: Ken Roczen completes the sweep of Indianapolis

Round 7: Cooper Webb dominant in second victory of season

Round 11: Cooper Webb holds off other title contenders