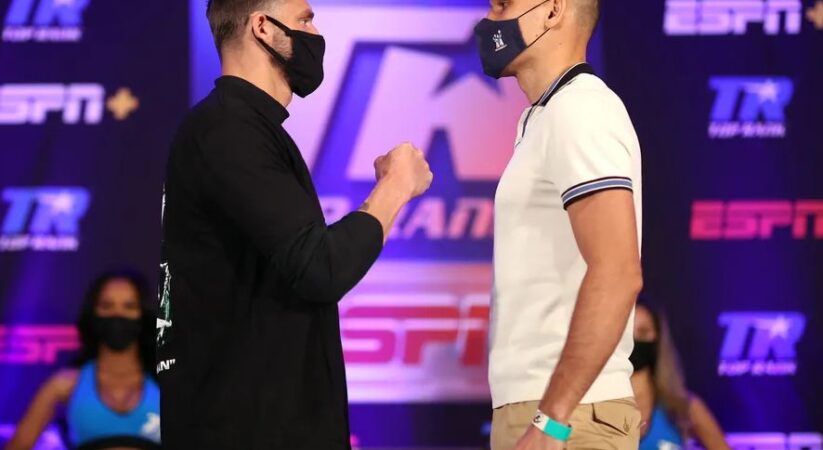 The WBO’s vacant light heavyweight championship is on the line Saturday evening when No. 1 ranked Joe Smith and No. 2 ranked Maxim Vlasov square off on ESPN at Osage Casino in Tulsa, Oklahoma. This fight was originally scheduled for February, but Vlasov tested positive for COVID-19 and it was postponed.

The full card gets going at 5:30 p.m. ET on ESPN+. Coverage of the main card is set to start at 10:00 p.m. ET on ESPN. Ting walks for the main event are expected at approximately 11:15 p.m ET, but that will depend on the length of the undercard.

If you were looking for a fun parlay for this weekend’s action of boxing (and this is only my opinion and not a recommendation), I might take Smith to win by stoppage at -110, Jaron Ennis to stop Sergey Lipinets at -305, and the over of 7.5 rounds in the Jerwin Ancajas vs. Jonathan Javier Rodriguez fight at -110. That would pay out $384 on a $100 wager.
Joe Smith Jr. vs. Maxim Vlasov records

Though Smith has three losses on his ledger, he’s one of the best at light heavyweight. Coming into Saturday night, he’s 26-3-1 with 21 KOs. And some of his previous victories are awfully impressive, including scoring a massive upset vs. Andrzej Fonfara with a first-round knockout and sending Bernard Hopkins into retirement by knocking him completely out of the ring. In retrospect, a 2017 loss to Sullivan Barrera doesn’t look great.

Vlasov isn’t well known in the U.S., but he’s had a long and solid career. At 45-3 with 26 KOs, the 34-year-old scored his biggest win against Isaac Chilemba in 2019. But he also has losses to Chilemba, Krzysztof Glowacki (at cruiserweight) and Gilberto Ramirez. Mostly, when he’s faced world-class opponents, Vlasov has lost. And Smith is world class.

Vlasov could present some issues for Smith. Smith expects Vlasov to be busy and aggressive, and Vlasov has a good chin (he’s only been knocked down a couple of times in his 48 fights and has never been stopped). But Smith’s boxing ability is underrated, and he’s got such great power in his hands. Vlasov could make this an even fight through the first few rounds, but Smith is going to end it midway through the bout. Call it Smith by stoppage in the eighth.