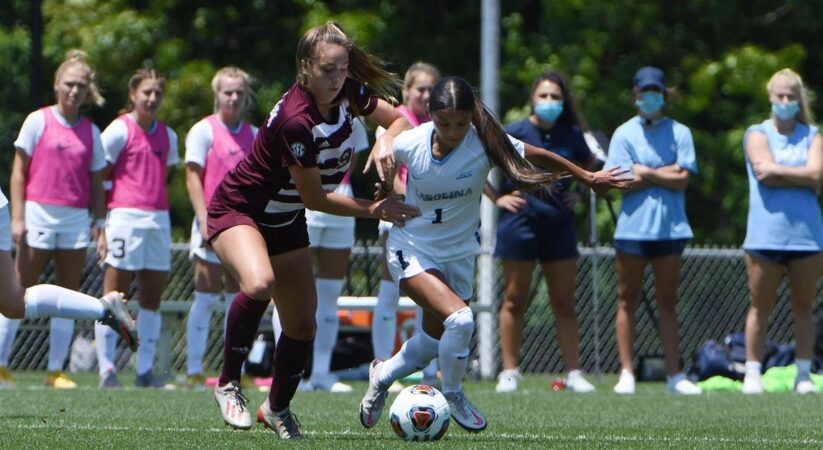 How to watch Santa Clara vs. North Carolina in College Cup

The journey towards a national championship continues for Santa Clara women’s soccer.

For the first time in 16 years, the No. 11 Broncos are headed to the semifinals of the National Collegiate Athletic Association (NCAA) Tournament. They took down No. 14 Clemson in a close 1-0 match last Sunday to advance to their 11th College Cup in program history. They will face an East Coast rival, No. 2 seeded University of North Carolina (UNC), on Thursday at 5:30 Pacific on ESPN2.

“It’s been a while since our last trip to the College Cup,” said Head Coach Jerry Smith. “But we’re meant to be here. It’s going to be a battle.”

The Tar Heels have won 16 of the 21 total matchups between the two powerhouses, but the Broncos have won five of the last seven meetings (including their most recent match in 2018). In NCAA Tournament affairs, Santa Clara has won three of the last four matchups against UNC, including the national championship game in 2001.

Santa Clara’s win in the Elite Eight spoiled the chances of an all-Atlantic Coast Conference (ACC) College Cup. Joining Florida State, Virginia and North Carolina, the Broncos are the lone representative from the West Coast Conference (WCC), and the only remaining team residing west of the Mississippi.

The North Carolina Tar Heels enter Thursday’s College Cup matchup with an 18-1 record this year and currently ride a 7-game win streak in which they outscored their opponents 23-0. Their season has been dominant, along with their entire franchise history.

The Tar Heels have sat atop the collegiate women’s soccer world since the NCAA Tournament began in 1982. Since then, they have won 21 national championships––over 50% of all Division I championships ever played. The next best school on that list is Stanford with three total. North Carolina’s head coach Anson Dorrance has 889 wins, the most all-time.

Eight out of the 11 starters for UNC are underclassmen, but the team’s inexperience has not stopped the Tar Heels from being arguably the best defensive unit in collegiate soccer. It’s anchored by junior goaltender Claudia Dickey.

Dickey has improved every year since making the short commute from her hometown of Charlotte, North Carolina to UNC in Chapel Hill. This season, no goalie has shined brighter. She sits alone atop the NCAA leaderboards with 15 shutouts. The team’s latest 1-0 victory against Texas A&M marked Dickey’s seventh consecutive clean sheet. Her shutout streak is yet another milestone in a season that saw her play every minute in all 19 North Carolina games.

It is fair to assume that the Tar Heels will send their Dickey to the net on Thursday against Santa Clara. The Broncos’ high-flying offense will be tasked with putting at least one goal past Dickey for the first time she allowed three in a loss to Florida State on Nov. 15, 2020.

In order to beat a team like the Tar Heels, the Broncos know they will need to execute their chances when they get them.

“We have the utmost respect for UNC and their soccer program,” said Smith. “[Playing against] tough teams will expose your weaknesses and show you who you are. But these Broncos are resilient, they’re coachable, they’re meant to be here.”

Due to Santa Clara county’s strict coronavirus protocols, the Broncos were unable to play any pre-season and non-conference games in the fall. They also lost their entire spring season in 2020. The other three teams in the College Cup—Florida State, Virginia and UNC—each played at least 11 games in the fall against other top-ranked teams.

The Broncos have played 10 total games all year, including their three Tournament victories.

For more context, take the Stanford Cardinal: another collegiate soccer powerhouse. Stanford has won the national title two out of the past four years, most recently in 2019 against UNC. Like Santa Clara, they also lost their entire fall schedule due to county restrictions and had a shortened spring schedule. Despite their renowned and successful history in the NCAA Tournament, the Cardinal did not even qualify for the First Round this year.

“Thinking about how few games we’ve had, I know we’re still not quite where we need to be,” said Smith. “But it does make what we have accomplished this year that much more rewarding.”