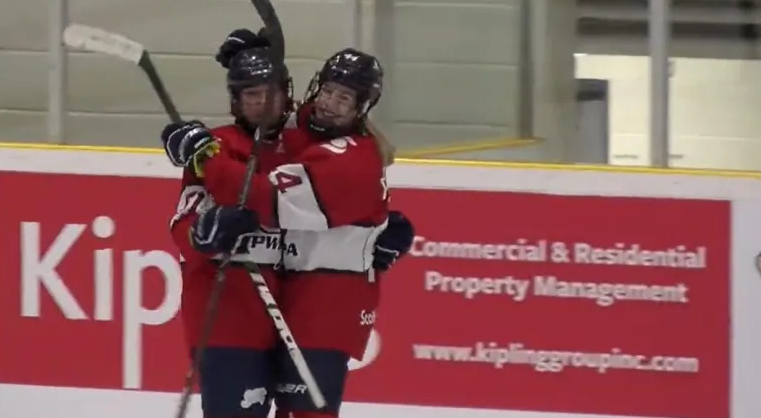 Team Scotiabank (Calgary) came out on top in overtime against Team adidas (Minnesota) on Saturday afternoon in 4-3 fashion at the PWHPA’s Kipling Group Showcase in Toronto. Team Scotiabank will next face Team Sonnet Insurance (Toronto) on Sunday at 2 p.m. ET.

Sarah Potomak’s game-winning goal in overtime lifted Team Scotiabank (Calgary) to a 4-3 win over Team Adidas (Minnesota) in Mississauga Ont., on Saturday for a place in the PWHPA Kipling Group Showcase Championship game.

Samantha Cogan opened the scoring for Team Scotiabank, but Alexa Gruschow (two) and Mellissa Channell (one) combined to score three unanswered goals to give Team Adidas a 3-1 lead and steal the momentum.

Alexandra Poznikoff answered back for Team Scotiabank, scoring twice early in the third period to tie the game before Potomak sealed the win with two minutes and 13 seconds left in the extra period.

Team Sonnet Insurance received a bye into Sunday’s final at Scotiabank Arena in Toronto after Team Harvey (Montreal) decided to withdraw from the tournament due to Quebec’s new COVID-19 related restrictions.