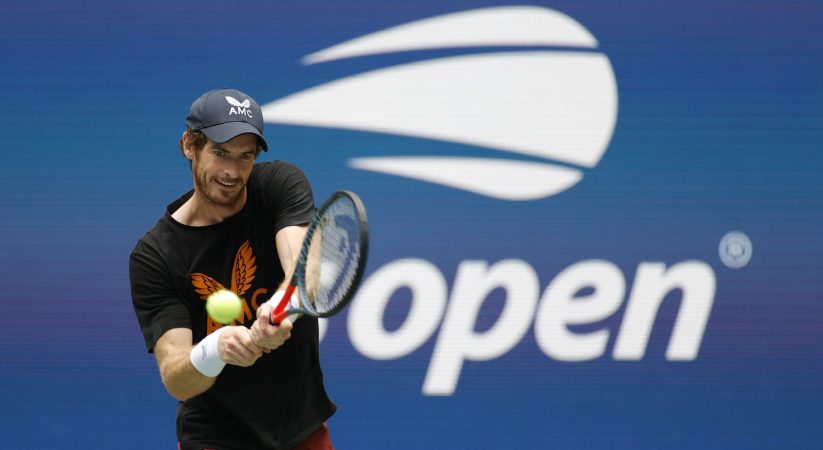 A former No. 1, a teenager on a big winning streak, the ATP’s all-time ace leader—those are just some of the players the Top 5 men’s seeds drew in the first round at this year’s US Open.

Here’s a breakdown of five of the most notable opening matches in New York this year:

It doesn’t get much tougher than this for a first-round match. Tsitsipas has had the best year of his career, winning his first Masters 1000 title in Monte Carlo, reaching his first Grand Slam final at Roland Garros and getting to a career-high ranking of No. 3—but on Monday the Greek will face one of the most accomplished players in the sport’s history, someone who at one point was even bundled in with the Big 3 of Djokovic, Rafael Nadal and Roger Federer, as one of the ‘Big 4’.

Murray isn’t just a three-time Grand Slam champion, he’s also a former US Open champion, winning the first of his majors here in 2012. He’s currently ranked just outside the Top 100 after battling hip injuries the last few years, but he’s still more than capable of hanging with the top players—just last year he beat then-No. 7 Alexander Zverev on these courts, at the relocated Cincinnati event.

“He’s still on,” Tsitsipas said of Murray. “He’s trying to be back on the tour last couple of weeks. He’s someone that has been putting a lot of work to get back and has been playing very good tennis to be standing where he’s at right now.

“I think I’m going to go for it, try my chances against him. He’s someone that won’t give up. I’ll have to bring some good tennis from my side.”

The current No. 3 and the former No. 1 will be playing each other for the first time.

World No. 2 Medvedev is one of the favorites to win the last major of the year—not only has he come very close the last two years, reaching the final in 2019 and the semis in 2020, but he’s had a great summer, winning his fourth career Masters 1000 title just a few weeks ago in Toronto.

Gasquet could pose some problems, though. Not only is he a former semifinalist here, reaching the final four in 2013, but he also has nine career wins over Top 5 players, including three at majors. The Frenchman also beat Medvedev in their first meeting in Montpellier in 2018, 6-0, 6-3, and pushed him to three sets in their only other meeting in St. Petersburg last fall, ultimately falling, 3-6, 6-3, 6-0.

Medvedev knows not to underestimate him.

“Tough match-up, playing Richard in the first round,” the Russian said. “Never easy. I think he was in the semis one time here, if I’m not mistaken. I played him last year in St. Petersburg, lost the first set, managed to step up and win the other two.

“I need to play well from the first point till the last one to beat somebody like Richard. I’m sure he doesn’t want to play me either in the first round. Just want to play good. Been practicing good. Ready to go out on the Monday.”

Normally a world No. 1 playing a world No. 145 in the first round of a major wouldn’t be on anyone’s radar, but this No. 145 was No. 473 at the start of the year. Rune, an 18-year-old from Denmark, has climbed almost 50 spots in the last three weeks alone, coming into the US Open on a 13-match winning streak that includes back-to-back Challenger titles in San Marino and Verona, Italy, as well as three wins in qualifying here. He’s now through to the main draw of a major for the first time.

The difficulty level kicks up in this match, though—Rune has never faced a Top 10 player, let alone a No. 1, let alone a No. 1 on a 21-match Grand Slam winning streak that has brought him a ninth Australian Open, second Roland Garros and sixth Wimbledon crown this year.

Tsitsipas leads the tour with 48 wins so far this year, and second-most goes to Rublev, who’s won 41 matches this year, a tally that’s taken him to his first two Masters 1000 finals at Monte Carlo (where he fell to Tsitsipas) and Cincinnati just last week (where he finished runner-up to Zverev). Now the Russian will kick off his US Open campaign against the all-time ace leader, Karlovic, who’s belted 13,709 of them in his long career (John Isner has the second-most with 13,034).

Rublev and Karlovic have never played before, but Rublev isn’t the biggest fan of playing ace machines—he’s actually 0-3 lifetime against Isner (with two of those losses coming this year).

Zverev showed signs of a hot streak earlier this year by winning the ATP 500 in Acapulco and his fourth Masters 1000 crown in Madrid, but he now seems to be on cruise control, coming into the US Open on an 11-match winning streak that has brought him the gold medal at the Tokyo Olympics and his fifth Masters 1000 title in Cincinnati last week. He was two points from winning his first major here last year, falling to Dominic Thiem in five sets, and he’s one of the favorites for the title this year.

But Querrey isn’t the ideal first-round opponent for Zverev—the German has won both of their previous meetings, at the Laver Cup in 2017 and Beijing in 2019, but Querrey’s a former quarterfinalist here (2017), a former Top 15 player (peaking at No. 11) and has six career wins over Top 5 players, three of which have come at majors (against Djokovic, Murray and Thiem at Wimbledon).

The American will also have the crowd behind him as they face off on Ashe on Tuesday.