Tuesday, 16 August 2022
You are here: Home Technology IF YOU’RE GOING TO CRACK AN IMAGE, DO IT RIGHT.” KFC RELEASES HUNDREDS OF MILLIONS OF PIXEL-CLASS CHICKEN IMAGES FREE OF CHARGE 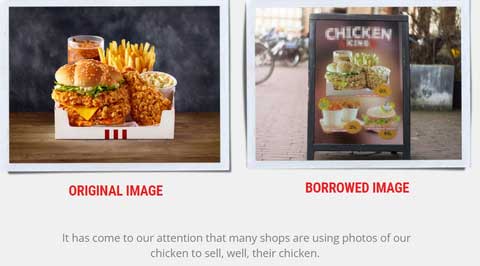 KFC has launched chickenstock, a site that provides high-resolution images of its chicken products free of charge.

ACCORDING TO THE COMPANY, MANY FOOD OUTLETS THAT OFFER FRIED CHICKEN AND OTHER FOODS SELL THEIR OWN CHICKEN PRODUCTS BY “BORROWING” KFC’S CHICKEN IMAGES WITHOUT PERMISSION. THAT’S BECAUSE KFC’S CHICKEN IMAGES “LOOK CRUNCHY, JUICY AND ATTRACTIVE,” WHICH IS USED TO LURE CUSTOMERS.

however, the company’s “unauthorized borrowing” of images is not a copyright issue, but rather that they are pixelsd images at low resolution. “people may want to see the texture, not the pixels,” he points out. this is because even if the company’s photos went up by searching for chicken images, it was only low resolution.

KFC launched a chicenstock site filled with high-resolution, distortion-free, pixel-free KFC chicken photos and released images for free. The reason for the free publication is described because “Our taste cannot be borrowed even if others can borrow our photograph”.

what’s amazing about chickenstock is its overwhelming resolution. as you can see roughly, the 4-megapixel class is the lowest line. most of the sets and images have a background of more than 14,000 pixels wide, some of which are 26,861×18,898 pixels, or 507.62 million pixels.

By the way, in the editing department environment, when I opened this image with more than 500 million pixels in Photoshop, 6.6 GB of memory was used.