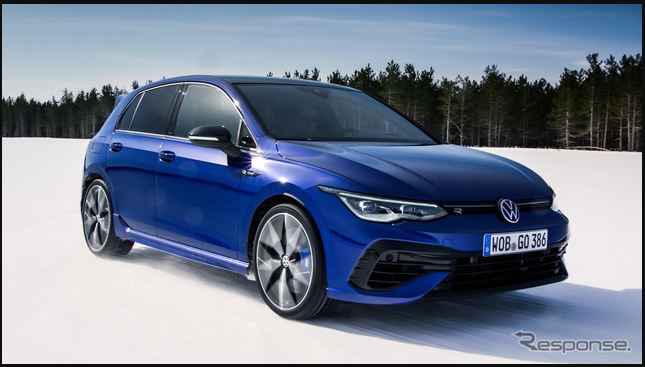 Volkswagen’s US division announced on March 15 that the new “Golf R” (Volkswagen Golf R) will be equipped with the newly developed 4WD system “4MOTION”.

new model will use the latest 4MOTION equipped with “R Performance Torque Vectoring”. The latest 4MOTION system has a new control function that distributes the engine output to the four drive wheels. In the new model, the driving force of the 2.0-liter in-line 4-cylinder gasoline turbo engine can be variably distributed not only between the front axle and the rear axle, but also between the left and right rear wheels. This has greatly improved agility, especially when cornering.

The rear differential with two multi-plate clutches is adopted, and up to 100% of the rear torque can be distributed to the left and right rear wheels. This system distributes power between wheels based on speed, power, yaw and more. In the corners, the system can direct more power to the wheels on the outside of the curve in a few milliseconds.

For the first time, the newly developed 4WD system has come to work closely with the electronic differential lock “XDS” and the adaptive chassis control “DCC” through the “Vehicle Dynamics Manager”. Vehicle Dynamics Manager is a new driving dynamics system. By controlling both the XDS function and the lateral input of the adjustable damper, the range from comfort-oriented settings to sporty ride-oriented settings is greatly expanded, and as a result, the power characteristics are greatly enhanced. I take pride in it.

As a result, we pursued optimum traction characteristics and neutral handling with the highest level of accuracy. According to Volkswagen, the latest 4MOTION and R Performance Torque Vectoring, an intelligently networked system, enables a new dimension in driving dynamics.

Thanks to this R performance torque vectoring, “drift” mode can be selected on closed courses such as circuits. In this mode, the ESC is changed to “ESC Sport” and the torque vectoring system starts drifting by sending all the rear torque to the outer rear wheels. In order to use this mode only in the closed course, the infotainment system displays a confirmation screen before operation.

◆ 2.0-liter in-line 4-cylinder gasoline turbo has a maximum output of 320ps The

Golf R has been a technical benchmark in its class, with all four generations so far being driven by 4WD, always dynamic, and having a special design. The new Golf R, which is the fifth generation, is said to have inherited that tradition.

The new Golf R is a high-performance grade located at the top of the new “Golf” series, which is the 8th generation, and will be the strongest golf in history. The “EA888” direct-injection 2.0-liter in-line 4-cylinder gasoline turbo engine was tuned exclusively. In addition to incorporating a water-cooled exhaust gas route to the turbocharger in the cylinder head, new technologies such as variable valve timing with dual camshaft adjustment function have been adopted.

The undercarriage setting was boiled down on the Nürburgring Nordschleife, Germany. The optional R Performance Package can be equipped with the “Nürburgring Driving Mode”.