Tuesday, 24 May 2022
You are here: Home TikTok Is Gripped by the Violence and Misinformation of Ukraine War 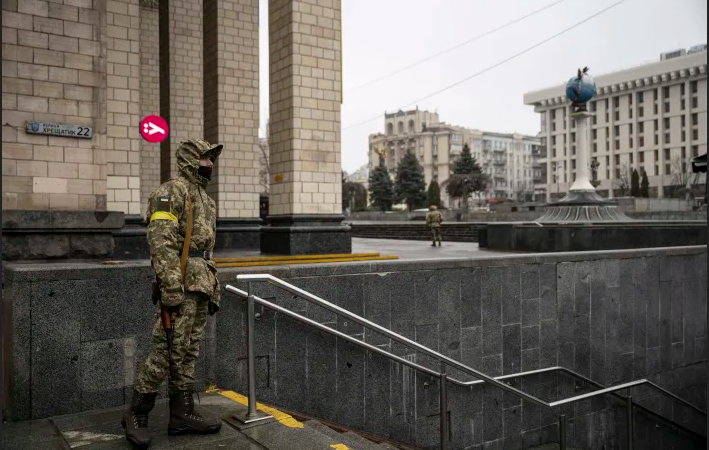 Bre Hernandez used to scan TikTok for videos of makeup tutorials and taco truck reviews. Since Russia invaded Ukraine, the 19-year-old has spent hours each day scrolling the app for war videos, watching graphic footage of Ukrainian tanks firing on Russian troops and civilians running away from enemy gunfire.

“What I see on TikTok is more real, more authentic than other social media,” said Hernandez, a student in Los Angeles. “I feel like I see what people there are seeing.”

But what Hernandez was actually viewing and hearing in the TikTok videos was footage of Ukrainian tanks taken from video games, as well as a soundtrack that was first uploaded to the app more than a year ago. The footage and soundtrack were traced back to their original sources in a New York Times analysis of the videos.

TikTok, the Chinese-owned video app known for viral dance and lip-syncing videos, has emerged as one of the most popular platforms for sharing videos and photos of the Russia-Ukraine war. Over the past week, hundreds of thousands of videos about the conflict have been uploaded to the app from across the world, according to a review by the Times. The New Yorker has called the invasion the world’s “first TikTok war.”

The surge has put TikTok in a challenging position. For the first time, it is dealing with moderating a flood of videos — many of them unverified — about a single event that has captivated a global audience. That is leading it to essentially confront a large scale of misleading and distorted information that has long bedeviled more mature social networks and video sites, such as YouTube, Facebook and Instagram.

Many popular TikTok videos of the invasion — including of Ukrainians livestreaming from their bunkers — offer real accounts of the action, according to researchers who study the platform. But other videos have been impossible to authenticate and substantiate. Some simply appear to be exploiting the interest in the invasion for views, the researchers said.

In one example, Pravda, a Ukrainian newspaper, posted an audio clip featuring 13 Ukrainian soldiers on Snake Island, an outpost of the Black Sea, facing a Russian military unit that asked them to surrender. The clip was then used in many TikTok videos, some of which included a note stating that all 13 soldiers had died. Ukrainian officials later said in a Facebook post that the men were alive and had been taken prisoner, but the TikTok videos have not been corrected.

“There are people who are, right now, seeing war for the first time on TikTok,” said Abbie Richards, an independent researcher who studies the app. “People trust it. The result is that a lot of people are seeing false information about Ukraine and believing it.”

TikTok and other social media platforms are also under pressure from U.S. lawmakers and Ukrainian officials to curb Russian misinformation about the war, especially from state-backed media outlets such as Russia Today and Sputnik. In response, YouTube has said it would block Russia Today and Sputnik in the European Union, while Twitter and Meta, the parent of Facebook, have said they would label content from the outlets as state sponsored.

TikTok has also banned Sputnik and Russia Today in the EU, and on Friday said it would start labeling the outlets as state-sponsored in the countries where they are still available. The app said Thursday that it had dedicated more resources to monitoring for misleading content about the war.

“We continue to respond to the war in Ukraine with increased safety and security resources to detect emerging threats and remove harmful misinformation,” said Hilary McQuaide, a TikTok spokesperson.

For years, TikTok largely escaped sustained scrutiny about its content. Unlike Facebook, which has been around since 2004, and YouTube, which was founded in 2005, TikTok only became widely used in the past five years. Owned by China’s ByteDance, the app was designed to make one- to three-minute videos easy to create and share. It developed a reputation as a destination for addictive, silly and fun videos, especially for young users.

The app has navigated some controversies in the past. It has faced questions over harmful fads that appeared to originate on its platform, as well as whether it allows underage users and adequately protects their privacy.

But the war in Ukraine has supersized the issues facing TikTok, which has over 1 billion users globally.

The volume of war content on the app far outweighs what is found on some other social networks, according to a review by the Times. Videos with the hashtag #Ukrainewar have amassed nearly 500 million views on TikTok, with some of the most popular videos gaining close to 1 million likes. In contrast, the #Ukrainewar hashtag on Instagram had 125,000 posts and the most popular videos were viewed tens of thousands of times.

The very features that TikTok designed to help people share and record their own content have also made it easy to spread unverified videos across its platform. That includes TikTok’s algorithm for its “For You” page, which suggests videos based on what people have previously seen, liked or shared. Viewing one video with misinformation likely leads to more videos with misinformation being shown, Richards said.

Another popular TikTok feature lets people easily reuse audio, which has enabled people to create lip-syncing scenes of popular movies or songs. But audio can be misused and taken out of context, Richards said.

Over the last week, audio from a 2020 explosion in Beirut was uploaded to several TikTok videos that claimed to show present-day Ukraine, according to the Times’ review. In another instance, a soundtrack of gunfire that was uploaded to TikTok on Feb. 1 — before Russia’s invasion — was later used in over 1,700 videos, many of which purported to be from the fighting in Ukraine, Richards said.

Removing such content is not easy, partly because of TikTok’s global nature. Once a video is uploaded, it is often recorded over and translated into dozens of languages. If the videos are not reported by users, they need to be independently found by content moderators proficient in those languages before they can be taken down.

“Video is the hardest format to moderate for all platforms,” said Alex Stamos, the director of the Stanford Internet Observatory and a former head of security at Facebook. “When combined with the fact that TikTok’s algorithm is the primary factor for what content a user sees, as opposed to friendships or follows on the big U.S. platforms, this makes TikTok a uniquely potent platform for viral propaganda.”

Dafne Atacan, 23, a Turkish national in the San Francisco Bay Area, said she was aware that she needed to fact check TikTok videos of the war. She said she had noticed that many of the videos appeared to be edited from news reports or were commentary from people in the United States who were watching Ukraine’s events from afar.

“I feel like lately, the videos I’m seeing are designed to get me riled up, or to emotionally manipulate me,” she said. “I get worried so now, sometimes, I find myself Googling something or checking the comments to see if it is real before I trust it.”

Hernandez, the student in Los Angeles, said she was surprised to learn from a Times reporter that some TikTok videos she had viewed about the war were misleading and unreliable.

“I guess I don’t really know what war looks like,” she said. “But we go to TikTok to learn about everything, so it makes sense we would trust it about this too.”

Hernandez added that TikTok remained her preferred platform for news. Most of what she sees on the app, she said, was real.