Monday, 21 June 2021
You are here: Home What Hayley Kiyoko Learned About Herself After Directing a Music Video During a Global Pandemic 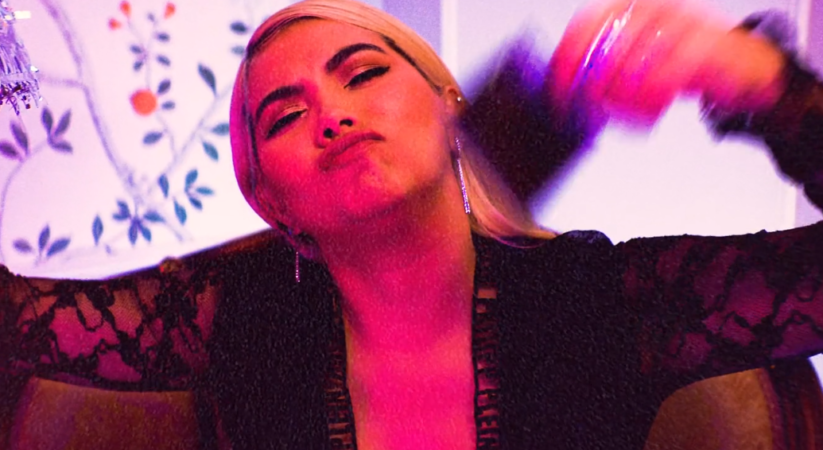 Hayley Kiyoko loves to challenge herself.

And making the music video for her new single “Found My Friends” was no exception. (No, we’re not just talking about those tight orange leather pants she dances in throughout. But, more on those later.)

While the pop star affectionately dubbed “Lesbian Jesus” by her adoring fanbase is no stranger to directing the visuals for her music, having helmed every single one since 2014, the latest marked her first time stepping behind the camera in the midst of a global pandemic.

“Directing this music video for ‘Found My Friends’ during a pandemic, on film, and just really being the only person in the video definitely came with its challenges,” Kiyoko told E! News in a new interview. “I think, emotionally, I was having many roadblocks because, you know, I hadn’t left my house in a year. And I haven’t been performing. I haven’t been able to connect with people. And so I think there is this weird sense of, ‘Can I still do this? Do I know what I’m doing? Do I believe in myself?’ You have tons of self-doubt that just starts like flooding in.”

Though the experience meant Kiyoko had to “really micromanage everything” in adherence to strict CDC protocols, pushing through the self-doubt to arrive at a successful final product proved to be a powerful lesson for the star. “It was a great reminder that I do believe in myself and that I do know what I’m doing,” she admitted. “I think I was able to walk away from the video with an even greater gift than I had before walking in with just, you know, feeling like I had found friendship with myself. I think it really took the whole experience and meaning behind the song to another level. And so it was very special to get to share that. It was my first shoot after the pandemic, so to share that with the crew and then to challenge myself even further, shooting on 16 millimeter [film] with limited time at this gorgeous hotel with so much space to cover…I just tend to love to challenge myself and make myself uncomfortable in many areas of my life.”

As she added, laughing, “I don’t know why I keep doing this to myself. I don’t know.”

It all seems to be part and parcel with the new Hayley who has emerged from this past year, as we all have, changed. “I think, pre-pandemic, I wanted to plan everything I needed to hit my markers. I need to hit my goals,” she explained. “And I think now, present Hayley, I still want to hit goals. I still have dreams. I still have aspirations that I want to kind of check the box off. But I know that it’ll happen when it’ll happen. I think that I’m embracing the longevity and the space that you need to kind of let life do what it’s going to do, you know? Because you only have so much control. And I think I’m embracing that ride a little bit more.”

Though the song, a dreamy piece of anthemic pop about learning to find friendship with one’s self, was written in January 2020, its themes certainly take on a heightened relevancy after months and months of isolation. (“Am I a witch?” Kiyoko joked.) And her fans have shown the highly personal track, her first release in over a year, nothing but love.

“It’s been really emotional and it’s just been so wonderful to get to share a part of me with the world and the fans,” she said. “I think for a while I started to really just separate myself and I kind of went into a different headspace. It was it was very challenging for me to share my life. And so it feels really, really good to open myself up again and share the music and see the fans reactions and see that they feel supported and understood and felt.”

But while she can’t wait to get out on the road and perform her new material for the fans—”We appreciated touring prior, but now, just seeing people is just going to be such a gift, truly,” she said—maybe don’t expect her to show up rocking the orange leather from the video. As Kiyoko revealed in the video’s behind-the-scenes footage, exclusive to E! News, the pants gave her quite a “Ross Gellar moment,” referring to the iconic Friends episode where David Schwimmer found himself essentially glued to his trousers.

“Every other shot, I had to take those pants off and fan them down. I had planned all these jump ups from my knee. I was like, ‘I cannot do this.’ I was like, ‘This is just LOL.’ But I did it. I proved myself wrong,” Kiyoko shared. “I don’t know if I’m going to be wearing those pants if we have to perform in the heat of the summer on festivals outside, but definitely indoors with air conditioning, it’s doable. It’s manageable.”

With the song and video released just as Asian American and Pacific Islander Heritage Month was getting underway in May, Kiyoko says she’s grateful to have the chance to “uplift” the community “and their voices.” She added, “I think growing up biracial, my sexuality tended to dominate most of my struggles. And so to be able to really acknowledge and celebrate my background and where I come from and the people and the community that desperately need our support and help and unity, it it feels great. And it’s something that’s definitely way overdue.”